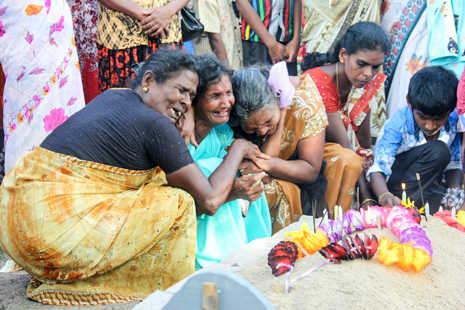 By Mytili Bala for Groundviews

Sri Lanka’s 26-year civil war ended six years ago amidst allegations of war crimes, crimes against humanity, and other serious abuses by both government and rebel forces. In 2011, a UN panel concluded that “the conduct of the war by [both sides] represented a grave assault on the entire regime of international law designed to protect individual dignity.” A UN investigation is complete, but its report has been deferred to September.

The new government of President Maithripala Sirisena has made welcome promises to hold perpetrators on both sides accountable, but it has yet to show tangible progress. Its decision last Friday to promote Jagath Dias as Army Chief of Staff raises real concerns: Dias is alleged to be responsible for serious international crimes during the last phase of the war.

Six years after the war’s end, here are six reasons why accountability for war crimes and crimes against humanity remains critical.

Accountability will help war-affected communities heal from a violent past. As one Tamil woman explained in her recent letter to the UN High Commissioner for Human Rights: “Each and every family in the Vanni region has been affected by the war.” Unless there is accountability, Sri Lanka’s war-affected families will never know what happened to their disappeared loved ones or be able to rebuild their lives.

Accountability may help deter future human rights abuses. Sirisena’s predecessor failed to deliver on promises of accountability, and troubling reports of post-war violations emerged. In 2014, Sri Lanka Campaign published a report pointing to post-war crimes against humanity committed against Tamils in the Northern Province. Another report documented systematic post-war torture and sexual violence of those perceived as having ties with the defeated LTTE. From an atrocity prevention standpoint, impunity paves the way for new human rights abuses to occur.

Accountability will help restore the rule of law and faith in a united Sri Lanka. Accountability matters to strengthen institutions and reestablish a commitment to the rule of law for all of Sri Lanka’s communities. Without accountability, there is the risk that Sri Lanka’s Tamil minority will feel little purchase in a united Sri Lanka, losing faith in the ability of state institutions and courts to deliver justice. Accountability will finally end decades of impunity for crimes by the LTTE, Indian Peacekeeping Forces, Sri Lankan armed forces, paramilitaries, and the JVP (People's Liberation Front of Sri Lanka).

Accountability will promote reconciliation across ethnic divides. By apportioning blame on both sides, accountability will help challenge nationalist myths within the Sinhalese and Tamil communities about the Army and the LTTE and help shift blame from whole groups to the individuals responsible for alleged crimes. In particular, many war-affected Tamils would like to see prosecutions of senior officials on all sides — army, LTTE, and paramilitaries — rather than lower-ranking foot soldiers. Pursuing accountability for those most responsible could therefore lay the groundwork for broader conflict transformation across ethnic divides.

Accountability will reaffirm and strengthen international law. In winning the war, Sri Lankan armed forces allegedly engaged in serious violations of international law, resulting in an “unimaginable humanitarian catastrophe.” Yet, after the war, Sri Lanka’s Defense Ministry held annual conferences to propagate the “Rajapaksa Model of fighting terror.” Israel, Myanmar, Thailand, Nepal, Pakistan, India, Colombia, and the Philippines have reportedly studied the Sri Lankan approach. Unless the record is set straight, the Sri Lankan experience could stand as a dangerous model and threaten international laws meant to protect civilians during armed conflict.

In short, Sri Lanka has a real chance to help all of its ethnic communities transition from a divided past to a shared, peaceful future, if it commits to accountability. Six years after Sri Lanka’s brutal civil war, accountability remains more important than ever.

Mytili Bala is the Robert L. Bernstein International Human Rights Fellow at The Center for Justice and Accountability, an international human rights organization dedicated to deterring torture and other severe human rights abuses around the world and advancing the rights of survivors to seek truth, justice and redress.