Whose faith is most persecuted? Let's not get competitive

Adopting a "more persecuted than thou" attitude is simplistic and can make it harder to find a resolution. 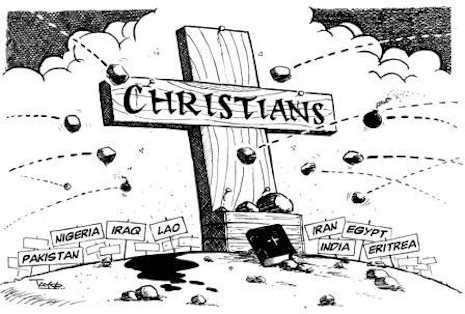 In recent years much attention has been given to the persecution of Christians, initially behind the Iron Curtain and more recently in the Middle East, Asia and Africa. This research is invaluable because it brings to notice abuses that could otherwise be hidden, and helps their alleviation. But in popular discussion the persecution of Christians is often compared with that undergone by other groups, like Muslims. The discussion takes on a competitive and proprietorial edge. This has unfortunate consequences. In the first place it encourages an exclusive focus on the religious reasons for persecution. In fact religious belief is only one of many complex factors in persecution. Hazaras in Afghanistan, for example, have often suffered persecution on the grounds that they are Shiite, but this is only one reason among many which masks the tribal difference that underlies their persecution. Similarly, the recently appointed Cardinal John Onaiyen has often cautioned against seeing the violence directed against Christians in the Obujan region as primarily religious. It reflects a wider tribal and economic conflict. The real, if periodic, persecution of Christians in China also needs to be seen against a broader context. Chinese rulers fear small, committed groups that they cannot control. The memory of the catastrophically destructive Taiping rebellion, whose origins lay in a sick man's chance reading of texts from Isaiah, lingers. The persecution of Christians today needs to be set alongside the even more implacable hostility to the Falun Gong. In the Middle East the position of Christians is particularly parlous. They have often suffered violence and discrimination in the name of intolerant forms of Islam. But the recent violence and dispersal of these churches have been provoked in no small measure by the reckless Western invasion of Afghanistan and Iraq. After many Muslims identified the armies of the West with Christianity, local Christians were easy targets. These complexities are likely to be lost when the persecution of Christians is made part of a comparison between religions.... ....But it is right to focus on the reality and wrongness of persecution wherever it is found. The persecution of Muslim groups are as abhorrent as violations of the human dignity of Christians. All persecution is an offence against our shared humanity, and so to be deplored and its victims embraced. Full Story: Religious persecution is not a contestSource: Eureka Street