Who is Pope Francis?

A profile and appraisal of Jorge Mario Bergoglio, by Fr Mick Kelly 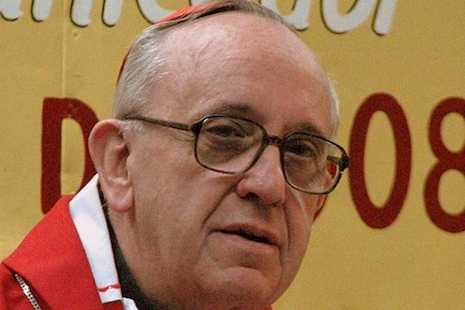 While everyone agrees that the election of Jorge Mario Bergoglio as Pope Francis is unprecedented in many ways, it is not entirely a surprise. He was runner up to Joseph Ratzinger in the 2005 Conclave that saw him elected as Pope Benedict XVI.

Bergoglio is the first Jesuit, first Latin American and first Pope from the southern hemisphere. He is of Italian migrant parents but not a “Romano” or a Curial Cardinal, having spent no time in his working life at the Vatican.

He is considered a theological conservative but an informed pastor, especially attentive to the needs of the poor, reflecting that commitment in the simplicity of his own lifestyle.

It could be said that the times and forces that have shaped him, the jobs he has done and the challenges he has had to face, have prepared him well for papacy.

Raised in the high time of socialist fascism – a political cocktail mixed uniquely for Argentina by Juan Peron – he joined the Jesuits in  the 1950s. Quite unusually, he was made Provincial of the Jesuits in Argentina in his 30s – 1973 to 1979.

The 1970s were years when the Jesuits in Argentina were riven with factions and conflicts, with many leaving the Order. The conflicts were as much about the direction for the Order and the Church - as Liberation Theology burst upon the scene in Latin America - as they were about local politics. Decades of political conflict over Juan Peron and his legacy, followed by a military dictatorship, divided Argentinians and the Jesuits there too.

Holding the Jesuits together at that time in Argentina was no slight challenge. But he was also fully engaged with a worldwide impulse for change within the Jesuits. They reached their decisive expression in 1975 at an extraordinary meeting of the highest level of governance in the Order – a General Congregation. Bergoglio was intimately involved in that process.

The chosen direction of the Jesuits incurred the wrath of the Vatican. In 1981, John Paul II set aside the head of the Order, Pedro Arrupe, and appointed a Visitor to investigate and, if needed, correct alleged excesses.

At around the same time, military defeat by the UK over the disputed Malvinas/Falkland Islands began the process of removing the military dictatorship and restoring democracy.

Bergoglio is criticized for his apparent fence sitting during the dictatorial regime in Argentina during this period. But he led public calls for the repentance of the Church for its silence over the “dirty wars” and “disappearances” during the military dictatorship.

Bergoglio has been a bishop since 1992 and archbishop of Buenos Aires since 1998. While not the largest archdiocese in Latin America, that gives him a solid 15 years of substantial leadership experience of the political and, as an Argentinian, the economic games that are played.

His time leading that archdiocese and the Jesuits during their turmoil in the 1970s should have led him to ask the right questions, appreciate the processes required for systemic change and insight into the sort of people he needs around him to effect change.

In taking the name of Francis, Bergoglio is said to be invoking the memory of St Francis of Assisi. He might also have a few others in mind – two Jesuits: the missionary Francis Xavier and the third Jesuit General, Francis Borgia, a widower, father of a large family and Duke of Gandia, who joined the Jesuits in mid life and because of his administrative experience, quickly shot to the top job.

It only remains to be seen if a smart and experienced outsider is equal to the task of reforming the Curia and bringing wider Church processes closer to what Vatican II invited the Church to become.