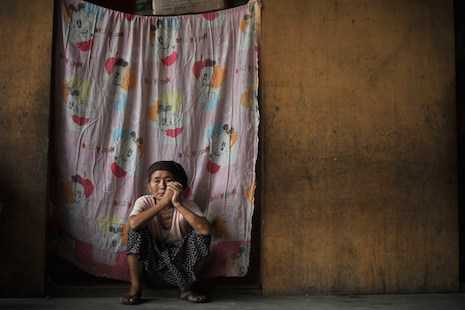 An ethnic Kachin woman sits outside her room in a relief camp in Laiza, in Myanmar's northern Kachin state, in this September 2012 photo. (Photo by Soe Than Win/AFP)

Tens of thousands of people have been displaced since 2011, following the breakdown of a 17-year ceasefire between Myanmar's military and Kachin rebels.

More than 100,000 internally displaced people, many of them Christians, have been living in temporary camps in government and rebel-controlled areas in Kachin and northern Shan states.

Tu Ja, a Catholic politician from the Kachin State Democracy Party, said it appears that many people living in displacement camps in government-controlled areas will get the chance to vote. He saw voter lists when he visited a displacement camp in Myitkyina, the Kachin capital, on Nov. 2.

"When I met with people from the camps, I told them that I reached out to them to show solidarity with them and I didn't tell them which party they would vote for," said Tu Ja, who is running for a seat in the state parliament. "But I found out that these people show an interest in the elections."

However, it may be a different story for displaced people living in rebel-controlled areas. Election authorities have already canceled the vote in more than 400 villages in parts of Kachin and Karen states, due to security concerns.

"This is a serious loss for ethnic parties' votes, but I hope that people from (displacement) camps under the government-controlled areas would support ethnic parties," he said.

Roughly half of the more than 100,000 people displaced in Kachin and Shan states live in rebel-controlled areas, according to the U.N. Office for the Coordination of Humanitarian Affairs. This means tens of thousands of displaced people could find themselves without a vote on election day.

Of the displaced Kachin that can vote, many say they have yet to decide who to support in the election, since they are unfamiliar with the candidates from the various political parties.

For the father of three, the main concern is not the election itself, but returning home.

"We are very keen on returning homes after getting stability and peace," said Mar Tu, whose family fled its village in 2011 due to fighting between the military and Kachin rebels.

But even potential voters in government-controlled areas may not be equipped to vote.

Aung Myat, a Kachin Baptist leader who supervises the Jar Mai Kaung camp, said that political parties and civil society groups have come to the camp to offer voter education; local election officials have not.

He said there were roughly 500 eligible voters of the 1,000 residents in the displacement camp, but authorities have not posted an official list of voters.

"Our ethnic people's criteria are that no matter who forms a government, they must bring peace and tranquility to the region. For (displaced people), their priority is going back home," said Aung Myat, who is also coordinating voter education campaigns with nongovernmental organizations.

Another challenge is that many local people are finding it difficult to choose among the array of political parties up for election. There are 93 political parties contesting the vote, including six ethnic Kachin parties based in the state alone.

"People have a desire for uniting one Kachin party by combining all ethnic Kachin parties," Aung Myat said.

Christians form a majority in Kachin state and their vote could play a key role when it comes to representation for minority ethnic groups in the new parliament.

The Rev. Lama Yaw, spokesman for the Kachin Baptist Convention in Myitkyina, said that he has fresh concerns about 1,000 people who were displaced following clashes in July. They are currently living in the jungle without access to humanitarian aid, he said.