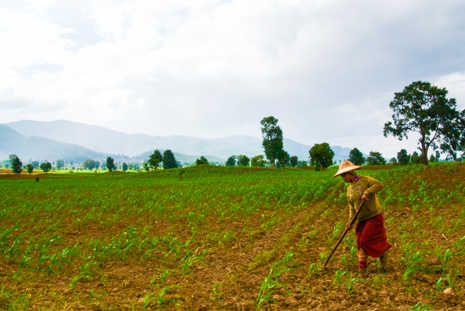 One morning earlier this year, 63-year-old Myint Aung took a thick red pen and scrawled a series of messages on sheets of paper and on a large piece of plywood.

Then, at about 6:45 a.m. on May 21, according to witnesses, he walked onto the main thoroughfare of Ye Pu village, in the southern part of Myanmar’s mountainous Shan state, and poured gasoline down his front.

“Everyone thought there was a fire at one of the houses,” recalled Daw San, 56, who walked over to see what was happening. As she neared, a burnt figure came into view.

“His clothes were burned off,” she said. “The flames had pulled them right off his body.”

Myint Aung was quickly taken to a hospital in the nearby state capital, Taunggyi, but he died of his burns the next day.

A nurse at the hospital told his family that Myint Aung was able to mutter a few words before he died: His immolation was an act of protest, he had said, on behalf of his family and friends.

The village has for more than a decade been locked in a land dispute with the regional command of Myanmar’s powerful military. In 2004, officers from the Myanmar army’s Eastern Command told villagers that they would be occupying a large tract of land beside the village.

“They just pointed and said ‘This is ours.’ Later they put up some red flags to show where they had taken land,” said Ma Maw Maw Oo, 44, the late Myint Aung’s niece and a farmer.

Locals estimate that the military claimed more than 2,000 hectares of land from the surrounding area. Some farmers were allowed to keep sowing crops, but the army later demanded that they pay a yearly fee to work their own land.

Then came the companies. Villagers say the military has granted land to six companies. One firm has planted sugar cane and built an ethanol factory. Another company is growing grapes for wine. Army officers have also built small homes and demarcated plots of land to grow their own crops. An incomplete structure on Ma Maw Maw Oo's farmland marks a claim made by local soldiers. (Photo by John Zaw)

In the last four years, Myanmar’s quasi-civilian government — still dominated by former generals — has instituted economic and political reforms, ushering in a new engagement with the West. But the reformers have stopped short of curtailing the power of the military, known as the Tatmadaw, which retains control over constitutional reform and some government ministries.

The military — legally entitled to take land and other resources for the sake of national security — has seized thousands of hectares, often using the land to fund its activities, or for the personal gain of its personnel.

The problem has been reported across Myanmar, including in ethnic minority areas where many Catholics and other Christians live. A report released in June by the Karen Human Rights Group — a campaign organization representing the largely Christian Karen ethnic group — found that “villagers in Karen areas of southeast Myanmar continue to face widespread land confiscation at the hands of a multiplicity of actors”, including the Myanmar army, armed groups and private businesses.

In Shan state, local activist Tin Shwe — who is affiliated with the opposition National League for Democracy — said that land grabbing, involving both the military and companies with close ties to local officials, was a major problem. He said there were more than 2,000 ongoing cases in Shan state alone.

“Everywhere the military has a base, there is also a land problem there,” he said.

The Tatmadaw has made efforts to improve its tarnished public image. In comments published by local media last year, military officials promised to return any unused confiscated land.

These high-level promises in the country’s newly uncensored media have emboldened some farmers, including residents of Ye Pu, to return to seized land.

In mid-May, she began planting crops on a part of her land that had been demarcated as military-owned in 2004. Her actions quickly riled local army representatives, who responded by moving construction material — an old corrugated iron roof and some timber — onto her land.

She believes the soldiers intended to build houses on the land in order to demonstrate to senior officers that it was still in use, and therefore should not be returned.

A standoff followed, and on the night of May 20, Ma Maw Maw Oo and some friends slept in her field, hoping to assert their claim to ownership. U Lu Than, 71, believes his younger brother, Myint Aung, sacrificed himself on behalf of villagers locked in a land dispute with Myanmar's powerful military. (Photo by Simon Lewis)

Myint Aung, under the mistaken impression that his niece had been arrested, took action the next morning at dawn.

“Please return our land that was taken by the military,” Myint Aung wrote in one of his messages, just before setting himself on fire.

Since his death, the land-troubled farmers here consider Myint Aung to be a kind of martyr. Before his act of protest, they say, the land dispute received little attention, and villagers held little hope of facing down the power of the military.

Now, authorities treat them with some deference. Ma Maw Maw Oo and 16 others charged over the initial land dispute have not been arrested, as is common practice in Myanmar when charges are filed. Locals credit the interest taken in the case by civil society groups, opposition politicians and media, with Myint Aung’s death.

“He sacrificed himself for the sake of the farmers,” said U Lu Than, his older brother.