Which way forward for Christians in Nepal?

For Christianity to be more than just a foreign religion, it needs to become a fundamental part of modern Nepalese society 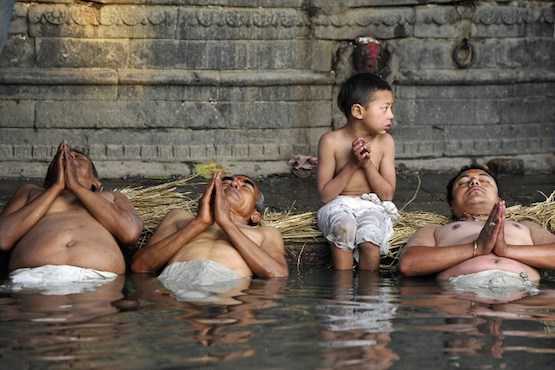 Nepalese Hindu devotees take part in a bathing ritual during the monthlong Hindu Swasthani festival in the outskirts of Kathmandu on Feb. 22 (Photo by AFP)

Being a Christian, one of my friends asked if I was not allowed to have a red tikka dot on my forehead. He also asked if we had to eat beef and drink cow's blood. The cow is considered a sacred animal to Hindus, who constitute most of the people in Nepal.

As the only non-Hindu member among my friends and family, I have encountered these types of questions a number of times.

Sitting with my cousins and companions I explain about the culture, about my Catholic faith and about Christian denominations.

Eating beef has never been a habit of mine, and with myself being Nepalese, I do consider the cow a special animal in the lives of our agrarian community. Understandably eating beef is not part of Nepal's broader culture. And as for what people wear, it is more about social symbols and culture than to do with religion.

As a Christian convert in Nepal, I was regarded as weaker in my faith because I am pro the local culture. Alternatively, by being a Christian convert I am now considered by non-Christians as a follower of "cow-eating foreigners" or being called "cultureless."

So can I be a Christian without eating beef? Of course I can!

Do I have to change the color of my dress and how I speak to be a Christian, of course not!

I find it very hard to accept that my new faith tries to control the richness of Nepal's culture. Yet, sometimes I have observed how new Christians try to act culturally different and it looks pretty awkward.

I also find it difficult to answer my cousins who ask me: "Why would Christian Westerners happily take part in our festivals while many Nepalese Christians try to pretend to be different from us?"

Most new Christians come from ethnic and Dalit communities and they often have a negative attitude toward discriminatory old Hindu traditions. That is understandable.

However, in the name of faith, some of us may have tried to denounce parts of the local culture, which can sometimes result in a negative outcome and create unnecessary obstacles as we try and spread the faith.

We have been interpreting biblical teachings in our favor and often emphasize those biblical verses that make us live our lives according to the priorities we believe to be acceptable.

Sometimes I feel as if we have forgotten the divine order to love one another and prioritize only preaching rather than showing by example.

If we love one another, we should embrace each other. Such an embrace allows us to respect the culture of each one of us.

We cannot become a better Christian by denouncing the good practices of the local culture. Having a clean heart and good ethical values makes us a true follower of Christ. A Nepalese man takes a selfie with a Hindu holy man dressed as the Hindu god Hanuman in Kathmandu on March 6. (Photo by AFP)

Respecting local traditions, though, does not mean to be blind to any detrimental elements of the local culture. Indeed, many people in Nepal are captive to many harmful cultural practices. The key aspect we need to remember is to remain enlightened and strengthened by our faith so we can negate some of the local socio-cultural malpractices. This is also a part of our contribution in refining the culture.

Nevertheless, the appearance that the church cannot integrate faith and local culture presents challenges and for real change to occur. It can't be done overnight. The test the church faces in this regard is how to best help local Christians refine their culture, to have them remove the bad habits and nurture the good via the Christian faith.

Another challenge that Christians in Nepal face is how various denominations can upset locals through their clumsy evangelization efforts. Instead of unintentionally offending people, we need to instead help them explore God without denouncing their good cultural practices. To assist with this, the church needs to offer clear guidance on how to be more culturally sensitive so bridges are built between people, as opposed to walls being built to divide us.

There has been an increasing feeling of intolerance after some Christian cults took advantage of the country being declared secular and imposed their own sense of evangelization. But as a part of the same society, being a Christian means we should be able to respect the culture of the context, get involved into local social affairs and maintain good ethical values.

In order to establish the church in a nation such as Nepal, the local culture should be respected and the Good News should be offered in the local language.

We don't have the right to say that people of a different faith are not people of God. If we believe in creation, then we should accept other people as our fellow brothers and sisters. This should make us more accepting of their cultures.

True faith is something that emerges and grows within a culture so people can experience the presence of God in their lives.