Where now for 'pressured' bishops?

Lack of Vatican action after the congress has left more questions than answers, a mainland priest writes 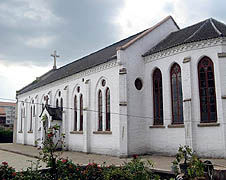 The Holy See issued communiqués on Nov. 24 and Dec. 17 to express its profound sorrow over the illicit bishop ordination in Chengde and condemned the Eighth National Congress of Catholic Representatives, which many bishops, priests and nuns were forced to attend. In the first communiqué concerning the illicit ordination, the “pressures” to attend were deemed to have been a sufficient reason to spare the eight bishops who are in communion with the pope for their participation in the ordination. According to priests of Hengshui (Jingxian) diocese, their bishop celebrated a solemn Mass on the feast of Christ the King the day after he came back from Chengde. The other bishops also continued to manage their dioceses and say Masses openly as normal. The Cangzhou (Xianxian) bishop was exceptional as he kept himself away from his priests and laypeople for some time. However, upon his return on Dec. 17, the diocese announced plans to ordain priests on Jan. 13. No one knows if the Holy See has given him any instruction or it was just his own decision. It seemed the second point of the communiqué: “the Holy See intends to carry out a detailed evaluation of what has happened, including consideration of the aspect of validity and the canonical position of the Bishops involved,” have nothing to do with all these bishops. Sympathy and understanding of priests and laypeople also turned the Holy See communique into wastepaper. The word “pressure” has artfully relieved the seriousness of illegitimacy of “self-election and self-ordination.” The calm attitude of these bishops after they returned to their dioceses led the laypeople to think they had no choice but to participate in the ordination. The bishops did not make known how the Holy See would handle their case. Their priests and laypeople did not ask due to sympathy or consideration of “face.” On the other hand, the Holy See has never made public what it will do, even for three similar cases in 2006. As a result, “pressures” became a shield, which rendered the communiqué’s second and third points (possible severe sanctions on Father Guo by canon 1382 of the Code of Canon Law) nominal. Faithful do not know their rights As for the second communiqué concerning the national congress, it seemed that participants who were present either willingly or against their conscience have not read the second point: “The bishops in particular and the priests will also have to face the expectations of their respective communities.” Very few of them have explained so far. Most faithful do not understand the meaning of their right to receive from their pastor “sure guidance in the faith and in the moral life.” Thus, many did not care about the congress. No one wishes to see those who suffered from pressures to be punished. The Holy See’s two communiqués aimed at solemnly declaring the Church’s position to safeguard the orthodoxy of the Catholic faith and to point out a direction for the Church in China. However, the calmness of the participants and the sympathy of priests and laypeople have blurred the path ahead. Was there anything wrong with the participation under pressure? If yes, it is strange to see  there was no suspension of ministry while the matter was investigated and Church life goes on in a way as if nothing has happened. If no, why did the Holy See publish the communiqués in the first place? Punishment is not the goal, but it helps people to know right from wrong. No punishment for making a mistake is equal to acquiescence. Those who were under pressure have come back. Which direction is the path ahead? “Reverse Thinking” is the penname of a mainland priest who belongs to one of the eight dioceses represented by the bishops in the Chengde ordination on Nov. 20. Related reports Vatican ‘sorrow’ over China Catholic congress Authorities pile pressure on Catholics in Hebei Vatican condemns illicit ordination in China What it means to force a bishop’s hand CH12767.1636