Where is Shariah law enforced in Southeast Asia?

Brunei and the Indonesian province of Aceh are applying it to all, including non-Muslims 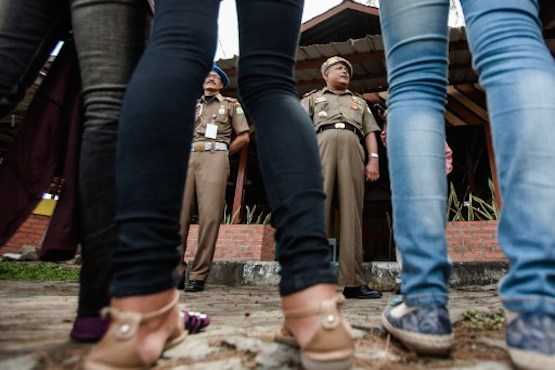 An Indonesian Muslim official speaks to female students caught wearing tight trousers which is against Shariah law in Banda Aceh in this file photo. (Photo by AFP)

Two places in Southeast Asia — Brunei and the Indonesian province of Aceh — have established Shariah law and Malaysia is considering following suit.

Brunei enacted Shariah in 2014, applying it to all, including non-Muslims, with some offences carrying the death penalty.

The new penal code is being implemented in three stages. In phase one fines and or imprisonment is imposed, phase two allows for the severing of limbs and flogging and phase three includes death.

Implementation of the first phase began in 2014 with fines or jail terms imposed for offences including "indecent behavior," failure to attend Friday prayers, disrespecting the month of Ramadan, propagating religions other than Islam and for pregnancies out of wedlock.

The second phase was due to be implemented by the end of 2014 but was delayed because of a lack of defined procedures in the Shariah Courts Criminal Procedure Code (CPC).

In the third phase, sodomy, rape, extramarital sexual relations, insulting any verses of the Quran or Hadith (saying of the Prophet Mohammed), blasphemy, declaring oneself a prophet or non-Muslim, and murder are all offences that carry the death penalty.

Brunei had maintained a moratorium on the use of the death penalty since 1957.

In February this year Sultan Hassanal Bolkiah, according to the Brunei Times, questioned why it would take until 2018 for all phases of Shariah to be enforced in the sultanate.

The minister of religious affairs told local media that the government planned to complete the CPC and enforce the full second phase of the Islamic criminal code by June 2017.

An Brunei expatriate who did not want to be identified said that non-Muslims were not overly concerned about the announcement. "They said that, under Shariah, crimes had to be witnessed by three people for charges to hold up in court," he said.

It is estimated that more than 100 people were caned in public in 2015 for breaching Shariah by selling alcohol, gambling, and sex outside marriage.

International media reported on the public caning of six gamblers, as well as an 18-year-old woman convicted of being alone in her room with her boyfriend which is classified as adultery.

According to an ABC Newsreport, the young woman, Kiranti, was forced to kneel on a stage in front of a large crowd and received nine strokes of the cane from a hooded man known as Algojo — the "executioner."

Kiranti was struck on her clothed back with a long cane, wincing with each stroke. After the caning she staggered as she was helped to her feet. Her boyfriend escaped caning because he was just 16 years old.

"This was not done to humiliate someone. It is to achieve the deterrent effect so other teenagers will not follow," Rahma Daniati, the head of the Shariah police in Aceh was quoted as saying in the same report.

The province was given autonomy to adopt Shariah after the devastating 2004 tsunami, and is the only part of Indonesia that enforces the code.

Changes introduced in 2015 extended the use of caning for moral offences and for the first time allowed the caning of non-Muslims. In theory, even an unmarried couple visiting Aceh on holiday can be punished for being alone together.

Amnesty International said canings in the province have become more common and demanded the law be repealed.

In April, an unmarried couple were given 100 strokes of the cane for being alone together, and a Christian woman was caned 28 times for selling alcohol.

A 52-year-old was accused of gambling after he was caught playing cards with a group of friends. He was jailed and caned, according to the ABC report.

"It was raining so I couldn't go home and I waited at the cafe for it to stop. We all started playing cards to fill the time. And about 12:30 they came and arrested us," he was quoted as saying.

"The pain was not so much but I felt humiliated," he said. "We were just playing for fun but the punishment seemed to be too much while bigger crimes seem to be ignored."

"And we, the little people, the lowest class of society — we seem to always be the ones who get punished," he added.

Shariah is the religiously based law of Islam that encompasses the religious, political, social, domestic lives of Muslims. Since Islam does not distinguish between religious and secular law, Christian leaders have often objected to the incorporation of the Shariah into civil law because of the legal discrimination against non-Muslims.