Where is Gao Zhisheng? China’s most famous lawyer, Gao Zhisheng, celebrated his 55th birthday recently. But nobody knows where he spent it. He was not with his wife and children, and they have not heard from him since he disappeared on Aug. 13, 2017.

Their repeated enquiries have resulted in conflicting information or simply no news at all. Amnesty International has now written an urgent letter to the Chinese regime demanding answers. "He has been subject to enforced disappearance, raising fear of torture and other ill-treatment," it said.

This is the eighth time in 12 years that Gao has been disappeared. That phrase might look like a grammatical typo, but it’s now an established expression in China among lawyers and activists. People don’t “disappear”; they are “disappeared” by the regime. This is often under a measure known as “residential surveillance at a designated location” or RSDL, well documented in a new report called “The People’s Republic of the Disappeared.”

This means they are held outside the legal detention system, beyond any proper supervision, where they are denied any access to legal counsel, all contact with family members, and the family are usually not informed of their whereabouts. It also means that the risk of torture and cruel mistreatment is even higher than in China’s regular detention facilities.

In 2001, Gao was recognized by China’s Ministry of Justice as one of the country’s top 10 lawyers. But his relentless defense of China’s persecuted religious minorities — Christians, Falun Gong practitioners and others — and his courageous open letters to China’s leaders appealing to them to respect human rights turned the Chinese Communist Party and its repressive apparatus against him. His law firm was shut down, his license to practice law was revoked, and he began a cycle of arrest, imprisonment, torture and disappearance that has continued, with periodic intervals of release, for more than a decade.

In 2006, Gao was charged with incitement to subvert state power. He was given a probation period of five years, during which he was forcibly disappeared at least six times. On one occasion, he was held incommunicado and tortured for six weeks.

In April 2010, Gao disappeared again while visiting his in-laws in Xinjiang. In December 2011, state media reported that Gao had violated the terms of his probation and had been sent to prison for three years. Following his release in August 2014, his wife reported that Gao had been kept in solitary confinement without sufficient light, had lost almost 20 kilograms in weight and was suffering from malnutrition. Three years later, he disappeared once more.

In 2016, while recovering from his ordeal in prison, Gao continued to challenge authorities by writing a 40-page document detailing human rights abuses and related social issues in China. In what is believed to be the first comprehensive human rights commentary written by a human rights lawyer still living in China, Gao argues that the situation in China has deteriorated to an unprecedented level.

It is, he claims, the “harshest and most brutal political oppression since the end of Mao Zedong’s rule.” CSW, together with China Aid and the Human Rights Foundation, were privileged to bring Gao’s commentary to the world’s attention three months after he disappeared again.

The tragedy in all this is not only that a brave Christian lawyer, who took astounding risks in pursuit of justice and motivated by his faith, is again separated from his family and subjected to undoubtedly horrific physical and psychological torture. It is also that the cause for which he has sacrificed so much has taken such an alarming downward turn.

Gao worked for the right to freedom of religion or belief for everyone, of all faiths, but today we see the worst crackdown on religion in China since the Cultural Revolution. Thousands of Christian crosses have been destroyed, churches dynamited, other churches closed, and pastors jailed. In Xinjiang we have seen at least one million Uyghurs incarcerated in prison camps in what is increasingly described as a cultural genocide.

International human rights organizations are calling for a United Nations investigation. The persecution of Falun Gong practitioners continues, while Tibet remains one of the world’s human rights crises but struggles to stay in the spotlight. And, as the China Tribunal in London has revealed, prisoners of conscience are targeted for forced organ harvesting.

Gao worked for the rule of law, yet in recent years hundreds of lawyers have disappeared or been jailed, Xi Jinping has amended the constitution to remove term limits and insert his “thought” as a constitutional requirement, and China has torn up its promises to the people of Hong Kong and is dismantling the “one country, two systems” model despite its obligations under an international treaty, the Sino-British Joint Declaration, lodged at the U.N.

Gao, who was twice nominated for the Nobel Peace Prize while in prison, worked for a more open China, yet today Chinese people throughout the country are subjected to mass surveillance wherever they are, whatever they do, and are penalized under an Orwellian system of social credit for any wrong move.

That doesn’t mean Gao’s work has been in vain. On the contrary, China needs people like Gao now more than ever. The question on everyone’s minds, however, which can only be asked outside China is: Where is he?

The international community now has an obligation to seek answers from China’s increasingly repressive regime. It is time to say with one loud, unequivocal voice: Free Gao. 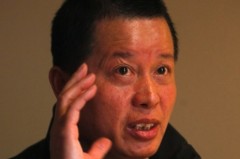