As a coronavirus lockdown devastates Thailand's economy, more people are taking their own lives 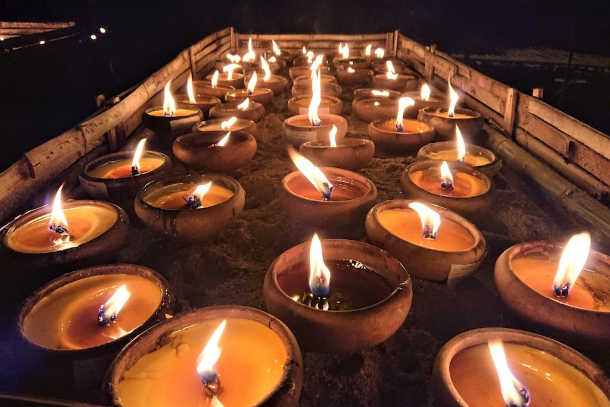 Candles burn at a Thai Buddhist temple. Thailand has seen a spate of suicides as a countrywide lockdown aimed at halting the spread of the deadly coronavirus has taken a massive toll on the economy. (Photo: UCA News)

A solitary tree that rises in a grassy field outside the seaside town of Sri Racha in eastern Thailand is haunted, local people say.

Three people have recently hanged themselves from the tree, one after another. The latest suicide was a middle-aged woman who laid her flip-flops and a plastic bag at the foot of the tree before climbing up into the branches with a cord.

“We don’t know why they killed themselves,” a volunteer rescuer who transports bodies to a local morgue told UCA News. “I think it’s because they had no money and became desperate.”

In recent weeks the rate of suicides has been spiking in Thailand as a countrywide lockdown aimed at halting the spread of the deadly coronavirus has taken a massive toll on the economy.

Thailand’s key tourism, services and manufacturing sectors, which until recently employed tens of millions of people, have been especially hard hit. Millions of locals and migrant workers from neighboring countries have fallen on hard times with no jobs and no immediate job prospects.

Many have despaired of their situation to a point where they have seen suicide as their only way out.

In a case that has lit up social media, a 19-year-old single mother, who was an aspiring artist, committed suicide in Bangkok on April 29 after posting a message online alongside an evocative portrait of Prime Minister Prayut Chan-o-cha that she had drawn by pencil.

The young woman, who was identified only by her first name Plaifon, intimated in some of her farewell messages posted online that she decided to take her own life because she could no longer look after her infant child.

“I don’t have money to buy milk for my kid. Everything is so expensive. I work 12 hours a day [as a security guard] and end up with nothing. I drew this in tears,” she added, referring to her drawing of the prime minister, whose administration she called “so mean.”

“Have you seen someone choose to die because they have nowhere else to go?” she asked plaintively. 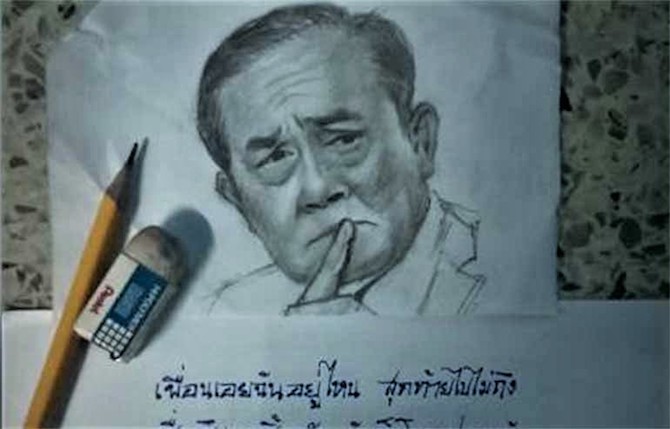 A drawing of Thai Prime Minister Prayut Chan-o-cha by a young woman who killed herself out of desperation at her financial situation. (Photo: Facebook)

Prayut, a former army chief who seized power in a coup in May 2014 and remains in charge after quasi-democratic elections last year, has been widely panned for mismanaging the Covid-19 pandemic.

The government has promised to give a monthly allowance of 5,000 baht (US$150) to newly jobless low-income earners, but so far only a fraction of the people who have applied for the handout have received it. Millions of struggling people have been turned down on seemingly spurious grounds.

In protest at being unable to receive the 5,000 baht, a 59-year-old woman called Anyakarn Booprasert swallowed rat poison pills outside the Finance Ministry in Bangkok on April 27. Onlookers called for help and she was taken to hospital where she received treatment. In another incident, a taxi driver killed himself out of desperation for the same reason.

Thailand has managed to control the spread of the deadly virus with fewer than 3,000 known cases and slightly over 50 deaths so far. This success rate has been partly down to locals taking extra precautions such as wearing face masks in public. It also appears that the virus is less able to spread in tropical regions with hot and humid climate.

The Thai government set out to control the spread of the virus in March by instituting strict lockdown measures, which included closing all entertainment venues, public places and shopping malls. Yet those same measures have caused millions of Thais and migrant workers to lose their jobs.

Losing their jobs has meant instant poverty for millions of locals with no savings who have always lived hand to mouth.

Thailand’s economy was already sluggish before the Covid-19 outbreak, with rising prices and massive household debt, which reached US$445 billion last December. In the wake of the global pandemic, which has caused the country’s thriving tourism industry to collapse, Thailand is facing prolonged recession and the prospects of a long road to economic recovery.

For many of the country’s poorest who work in low-paid informal jobs, those prospects seem especially daunting. Dozens of newly jobless locals are known to have taken their lives. Even some Western expats who have lost their jobs or whose businesses have collapsed have committed suicide in recent weeks.

A mother of two in a rural province hanged herself last week because she could no longer afford to buy milk for her six-month-old baby and her six-year-old child. Before the lockdown, the mother had eked out a living by selling drinking yogurt from a cart on the street.

In another case that roiled Thais, a 41-year-old man and his five-year-old daughter died after jumping into a river in the historic capital of Ayutthaya, north of Bangkok. Locals told police that the father, who was desperate after losing his job, jumped into the river, whereupon his young daughter, crying in despair, jumped in after him. Both drowned.

Based on official figures, many other Thais are contemplating suicide in the face of their economic hardship.

According to Satit Pitudecha, an official at Thailand’s Public Health Department, a suicide hotline received more than 600 calls soon after the lockdown measures took effect in March. The hotline received only 20-40 calls in January and February.

Thais like Plaifon are increasingly seen as indirect victims of the Covid-19 pandemic and their government’s mishandling of the crisis.

“She had been through a lot ... but she still tried [to make ends meet],” Plaifon’s heartbroken boyfriend, who worked with her as a security guard, told Thai media.

“She made use of her talent in drawing to get some money so that she could feed her baby. But during this time things are pretty tough.”