India's government is standing by its crackdown in Kashmir, causing havoc for those trying to tell their stories to the world Just four internet-linked computers have been made available in Srinagar's new media center, where up to 300 journalists have to book the briefest of phone calls hours in advance. (Photo supplied)

It is early morning in Srinagar as journalist Firdous Hassan gets ready to file a report from the basement of a private hotel, an El Dorado nowadays for scribes in the capital of Indian Kashmir.

Outside, the roads are sealed with concertina wires, alleys forested with blockades and infested with army personnel.

In the past 10 years of his journalism career, 34-year-old Hassan has seen the dark side of the Kashmir conflict, including the army’s anti-terrorist encounters, protests and bloody clashes. This is the first time, however, that he has had to work under such tumultuous circumstances.

Severe restrictions were imposed on Kashmir on Aug. 5 after the federal government, led by the pro-Hindu Bharatiya Janata Party (BJP), removed the state’s autonomy and split it into two federally ruled territories. 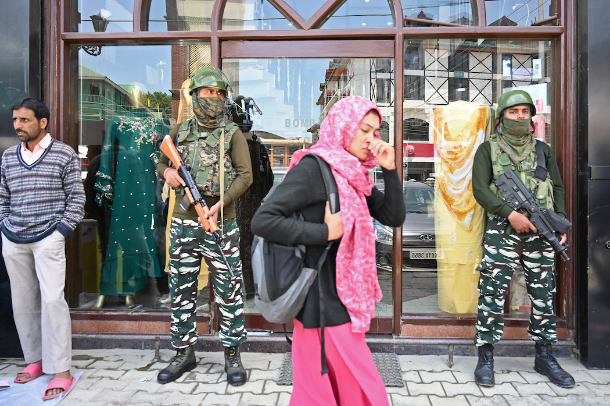 The government’s stranglehold on everyday life put an end to large-scale protests by Kashmir’s Muslims, who consider the removal of their autonomy as a precursor to lifting the restrictions on Indians from buying land in the region. They fear this will lead to Kashmir becoming increasingly Hindu, forever changing its Muslim-dominated demography.

The communication gag affected journalists and invited worldwide condemnation. Last week, however, the government established a facilitation center for journalists in the basement of a hotel.

The administration set up a single telephone connection and four computers with limited internet facility for about 300 journalists, including freelancers, staff writers and editors working in digital, electronic and print media outlets from around Kashmir.

Hassan, who works as a freelancer for a New Delhi-based newspaper, said he was excited the moment he heard about the media facilitation center.

However, he recalled the chaos. “You have at least 100 writers waiting in line to use to the internet facility at a time. There are only four computers. It is indeed a very peculiar situation for pen pushers like us,” Hassan told ucanews.com.

Waheed Ahmad, a video journalist working for an international news agency, told ucanews.com that he was not able to transfer a video lasting more than two minutes at a single time.

“That would take you at least an hour,” he said. “I have been working for the past 15 years and I've never witnessed a situation like this.”

To make a single phone call, journalists must write down their names in a register and then wait for their turn to call their editors. “It is only hours later that your name is announced on a speaker by a government official. You have to run over to call your editor for a few moments,” Ahmad said.

Owais Farooq, a writer for a New Delhi-based news website, has become creative. “As soon as I get a chance to use the internet, I check the email and take their screenshots. Then I work offline on my personal computer and save the work on a pen drive and send them to my editor by the evening when my slot comes,” he says.

Mudasir Ahmad, a member of the Kashmir Press Club, said it had informed the government of the hardships journalists face. “We have demanded more telephones and high-speed Wi-Fi. We have been assured that the demands will be considered on merit,” he said.

A police officer, however, told ucanews.com that the administration had no plans to lift the curbs on mobile and internet connections.

“For God's sake, please understand that all this is being done to protect people and safeguard their lives,” he said, asking not to be named as he was not authorised to speak to the media. “If communication facilities are restored, there are fears that anti-national elements could use it as a means to endanger people’s lives.”

Cause of the problem

India claims Muslim-majority Pakistan supports secessionism in the state, seeking to make it either wholly independent or part of Pakistan.

The conflict dates back to 1947 when the partition of India by the previous colonial British rulers created Pakistan as a separate nation. Nine years later, Pakistan adopted a constitution pronouncing itself an Islamic republic.

Both countries claim the entire Kashmir region as theirs and have fought three wars over it. There have also been countless skirmishes; each now administers part of the region.

The Indian-administered part of Kashmir has experienced increased violence since 1989 when the armed secessionism began.

Rights groups estimate that 100,000 people have been killed since but Indian official records put the number at closer to 47,000.