Xishiku Cathedral is decorated with lights for a Christmas Eve Mass in Beijing on Dec. 24, 2019. (Photo: Noel Celis/AFP)

The next six months will be very telling for the Vatican’s “temporary” but increasingly controversial and still-secret September 2018 deal with Beijing on the appointment of bishops.

The deal has only six months to run and the Vatican is sitting on the crucial appointment of a new bishop for the Diocese of Hong Kong. After a lengthy lull in any implementation of the deal, suddenly there are all sorts of movements and a couple of major question marks.

The first leg of the plan was to bring all the unknown number of bishops in the so-called underground church into the Communist Party-run Chinese Catholic Patriotic Association (CCPA). The Vatican dutifully did its part upfront, unwinding the excommunication of seven living and one deceased bishops ordained without the permission of the pope. Two Vatican-approved bishops were shunted aside in favor of freshly approved CCPA prelates. 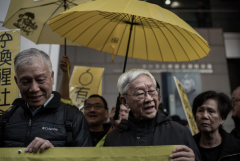