Pope Francis greets faithful from China as he arrives for his weekly general audience on April 18 at St. Peter's square in the Vatican. (Photo by Tiziana Fabi/AFP)

After years of rumor and speculation, the Holy See and the People's Republic of China (PRC) finally announced a "provisional agreement" on Sept. 22. This was not entirely a surprise though.

America — Jesuit Reviewreleased a very detailed article a few days in advance of the new development. In the article, Gerald O'Connell explained that an arrangement was on its way about the nomination of bishops in China and a few related aspects such as the reintegration of excommunicated bishops.

The key point is about the selection and appointment of new bishops in the PRC. Through this agreement, the Chinese government would acknowledge a papal right to participate in the final decision. Once a candidate is selected at the local level, Chinese national authorities will inform the Holy See. Then, the pope would have time to consider whether he will approve or reject the candidate.

However, despite the weekend announcement, observers were surprised that the exact text of the provisional agreement was not released. According to those in charge of the negotiations, the agreement has to remain a work-in-progress that will be adapted and revised in the coming years. Clearly, the two partners seem ready to provide some publicity about their on-going discussions and recent decisions. And yet, they want to move slowly and carefully.

Nonetheless, various commentators have criticized and offered warnings about this new step in the Sino-Vatican relations. Comments from inside and outside the Church are multiplying. There are those who are convinced of the hopelessly evil nature of the Chinese Communist Party as well as those who have doubts about the leadership of Pope Francis and see this agreement as one more proof of their own righteousness.

Nevertheless, these controversies should not allow us to miss the major aspects of this new development.

First of all, this is the first time ever that the PRC has officially granted a "foreign power" the right to participate in national religious affairs. Whether or not this will be implemented in the future, such a public statement remains entirely novel and astonishing. In the context of a rising nationalism where Chinese authorities constantly define religion as a national matter, the agreement with the Holy See offers a surprising contrast to the usual line.

It seems like the Chinese Communist Party is ready to move away from narrow historical narratives where colonial powers and religions were presented as a single enterprise. Officially, but we will need more time to see how concrete this becomes, China is opening space for foreign actors in its policy on religious affairs.

To highlight the significance and specificity of this provisional agreement, we must remember that the Dalai Lama does not enjoy anything similar. Indeed, there is no other religious entity with similar privileges in China today. Everything is supposed to be under the control of the Party. We may have to pay attention to how Tibetan Buddhists and other religious "minorities" respond to this new Catholic development in the near future.

Second, observers should notice that the agreement has been made by the Chinese Department of Foreign Affairs, and not by the department in the United Front in charge of religious affairs. The United Front is not even mentioned and we may wonder why. 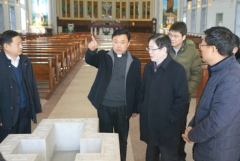 At this point, it is impossible to entirely explain this silence and predict its significance in Chinese religious policy. Yet, the very visible presence of the Chinese Department of Foreign Affairs is rather surprising for an agreement that is presented as pastoral and not political. It may be true that the provisional agreement is mostly about Chinese Catholic bishops. Yet, China seems ready to acknowledge the broader and international aspects of their leadership.

At this point, the now public and visible dialogue between China and the Holy See suggests that the PRC's religious policy is not as rigid and oppressive as many present it to be. Things seem more subtle than frequently reported, and possible developments appear more diverse than expected. The agreement suggests that the question of religious freedom in China is not as forlorn as Western media suggest.

Finally, we should not reduce this agreement to international politics. The few decisions made by the agreement promise already a wide range of consequences. For instance, many Chinese dioceses have no bishop even though they have had a rather consensual candidate to present for years.

Indeed, local communities postponed the ordination of these candidates in order to avoid the problematic presence of excommunicated bishops during those ordinations. This difficult situation is now solved and we may see numerous episcopal ordinations in the coming years.

Similarly, the fact that the agreement came with the creation of a new diocese suggests that the Holy See and China are ready to regularize the mapping of Chinese dioceses. Since the 1950s, several alternative mappings and overlapping belongings have been penalizing the Church in China. Allowing a rationalization of diocesan territories would certainly benefit to the pastoral care of the Church.

Michel Chambon is a professor of anthropology at Hanover College and his research focuses on the lived reality of Christianity in contemporary China.