What's behind the pope's friendship with evangelicals?

His desire for reform may go deeper than is generally imagined 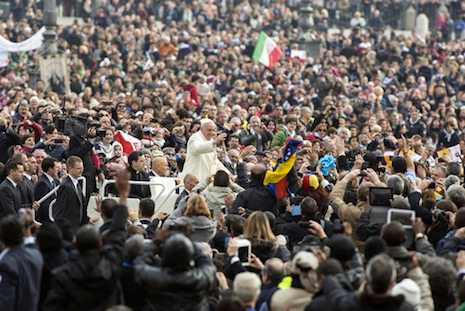 By Fr. Dwight Longenecker for Aleteia

Earlier this year, Pope Francis met with an old acquaintance named Tony Palmer. Palmer, who died tragically in a motorcycle accident last week, was a South African who lived in England. Married to a Catholic Italian, Palmer met the pope when he was a missionary in Argentina.

Palmer claimed the title “Anglican Bishop” but he was not a bishop in the established Church of England. Instead it is more accurate to say that he was a bishop in the “Anglican tradition.” Part of a new evangelical church movement which treasures tradition as well as charismatic worship and Evangelical zeal, Palmer was a good representative of a Christian movement that is sometimes called “convergence church.”

The “convergence church” can best be described as a para-church fellowship that is Evangelical, Charismatic, and Catholic. In other words, they embrace and endorse the best of these three Christian traditions. Without an organized structure or denominational bureaucracy, convergence church members move across denominational, national, and traditional boundaries. Loosely knit and forming alliances among sympathetic Christians in many denominations, they are often bright, zealous, positive, and pro-active in their Christian ministry.

With an emphasis on a simple gospel message, they also appreciate liturgical worship, practice the gifts of the Holy Spirit, and a profound love of the Sacred Scriptures. The convergence church Christians sit lightly towards established denominations of all kinds and aim to preach and live a basic, radical Christianity.

If we want to understand Pope Francis as a reformer, it is his appreciation of this new breed of Evangelicals which may shed most light on him as a person and the aims of his papacy. It is interesting to observe that the pope has maintained cordial relationships with the leaders of the established Protestant denominations like Justin Welby, the Archbishop of Canterbury, but when he meets with his Evangelical friends he invites them for breakfast or lunch, and sits around with them laughing, talking, and enjoying fellowship for hours.

Those who see Pope Francis as a reformer should see in his relationships with the Evangelicals what the heart of his reform is all about. It is not simply an attempt to clean up the Vatican bank or sweep the church clean of pedophiles. It is not simply the symbolism of living in the St. Martha Hostel, eating in the cafeteria, and riding in a modest car. His planned reform is far more radical than that. He actually wants Catholics to follow Jesus Christ in a joyful, radical and earth shaking manner.

Francis’ appreciation of the Evangelicals is therefore more than a cordial attempt to reach out to Christians who have always been marginalized by the Catholic Church and who, truth be told, have usually been harshly anti-Catholic. His appreciation of the Evangelicals is more than an attempt to stem the tide of Catholics to the charismatic churches across the globe. Instead he genuinely admires them and, in many ways, wants Catholics to be more like them.

Does that mean Catholics have to be more happy clappy in worship, speak in tongues, and embrace a watered down, utilitarian Calvinism? Does Francis want to Protestantize the Catholic Church? By no means. I think he wants Catholics not to be more Protestant, but more Catholic. In other words, he wants Catholics to return to the zeal and passion of the saints and martyrs. He wants Catholics to re-learn the simple life of the apostles and take joy in the most elemental levels of the faith -- a life full of the Holy Spirit in a day to day relationship with Jesus Christ.

Full Story:Francis and the Evangelicals