What will the Jesuits do next?
Now it's being spelled out to them in four 'Universal Apostolic Preferences' A file image of a Jesuit standing in front of St. Ignatius silver statue placed over his tomb inside the Jesus Church in Rome. (Photo by Filippo Monteforte/AFP)

There’s an old weather-beaten joke in church circles which goes like this: Name a few things that even God doesn’t know. Part of the answer is: What will the Jesuits do next?

In recent months, the Jesuit Superior-General Father Arturo Sosa Ablasco has literally told all the Jesuits what they must do next. He has come out with four “Universal Apostolic Preferences,” which are, in a way of speaking, the four priorities for Jesuit apostolic work in the new millennium. They are preferences, but they apply universally.

This is not the first time a Jesuit General has done something like this. At their 32nd General Congregation in 1975, the-then General Father Pedro Arrupe’s dream of working for the poor was crystallized in the document “Our Mission Today: The Service of Faith and the Promotion of Justice.”

It stated: “Our faith in Jesus Christ and our mission to proclaim the Gospel demand of us a commitment to promote justice and work in solidarity with the voiceless and the powerless.”

The decree thus basically defined all the work of the Jesuits as having an essential focus on the promotion of social justice as well as the teaching of the Catholic faith.

“The Society of Jesus is somewhat unique in encouraging its members to follow their interest and talents — as theologians, missionaries, retreat directors, teachers, artists, writers, musicians, counselors, scientists and pastors — to bring glory to God in all areas of human endeavor and thereby meet the needs of the time,” it continued.

“This is in line with Ignatius’ Spiritual Exercises (#236) through which Jesuits learn to find God in all things. It was said of Father Arrupe that he “saw the hand of God in everything.”

Father General Arturo Sosa, taking his cue from his great contemporary Pope Francis, the first Jesuit Pope, enunciated these four priorities for today’s Jesuits: To be inspired by the Spiritual Exercises and the importance of discernment; to work with refugees and youth; and to care for this earth, God’s creation.

Let us say a word about each.

First of all, Jesuits are asked to live the inspiration of their foundational document, The Spiritual Exercises, and to carry its signature mark wherever they go: that is, to be people of discernment.

Father Arturo Sosa knows very well that rules and constitutions go only so far in the rapidly changing scenario of today. What is vital, rather, is to have a discerning heart, docile to God’s Spirit, which leads one to choose wisely and with freedom.

This is important because these three “preferences” run counter to the traditional Jesuit investment in schools, colleges and spiritual ministries. How does one invest in the new without relinquishing the old? Or what should one jettison of the old? Difficult options, hard choices.

More specifically; the mass movement of people across national frontiers in search of gainful work or in flight from persecution is one of the signs of our time. In 1980, Father Pedro Arrupe asked the Jesuits of Southeast Asia what might be done to help the Vietnamese “boat people” and thus founded the Jesuit Refugee Service (JRS). To date, JRS has helped more than 40 million people to find shelter and security across the globe.

The refugee problem has not gone away, however. In fact, it has become even more monstrous and intractable, largely because of the many wars and persecutions carried out by governments against their own people. Look wherever you will, and there are millions of poor either displaced within their own countries, or desperately seeking asylum overseas. Father Arturo wants Jesuits to be present with these people — through rehabilitation, through advocacy and, even more simply, through accompaniment.

Another key area is accompanying young people and understanding their needs. With the collapse of organized religion almost everywhere, youth in many cultures are adrift, seeking solace in sex, drugs, crime or terrorism, many of them alienated from their families and society. What have the Jesuits to say to people such as these?

A third area which has assumed urgent importance in our times is environmental disaster, also known as climate change. Perhaps it’s much too late already to think that reversals in human behavior will correct the extreme weather patterns which are already affecting societies all over. And yet, this is a phenomenon we dare not ignore.

Will Father Arturo Sosa’s four “preferences” have their desired effect?  We know from experience how the “faith and justice” mandate of Our Mission Today tore the Jesuit Society apart and caused much upheaval in the 1970s and 80s.

Father Arturo has put his finger on three phenomena which are changing our world as we know it. All he asks is that Jesuits address these issues in their own way and even more, that they involve their collaborators and partners in taking up issues in which they, Jesuit fathers, find themselves less competent.

This is “something new” in the present Society of Jesus; its outreach to men and women associates who can carry the Jesuit charism much farther than the men of the Society. In multiplying Jesuit partners, Jesuits multiply their strengths and assets. 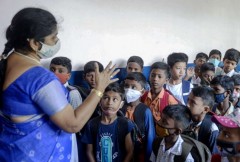