What is driving some of Hong Kong's youth to suicide?

For others, faith helps them stay clear of self-destructive thoughts 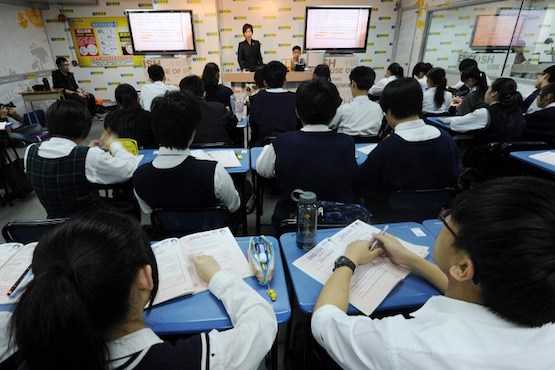 A file image of secondary students attending an English class in Hong Kong. Academic pressure is one factor blamed for suicides among young people in the city. (Photo by Mike Clark/AFP)

Seventeen students — aged from 13-25 — jumped to their deaths in Hong Kong during the first four months of this year, almost half of the total 38 suicide cases in 2016.

The rising number of suicides by young people has shaken Hong Kong society.

Form four student Siu Chui told a seminar organized by a Christian group in April that she thought suicide was a cowardly act until she saw a boy jumping off a building a few months earlier. From there she began to reflect why there has been an increase in student suicide numbers.

"In my case, after going up a class, I have lots of tests, homework and evaluation. We need to absorb all the knowledge in a short time to catch up with the syllabus. Frankly speaking, I'm a little tired and confused," said Siu who is in her mid-teens.

"After I go home I want to rest but my parents nag me to use the time to study, saying that if I don't, I cannot enter a good university and find a good job," she told the seminar that was held at the Applied Theological Education Center of Hong Kong Baptist Theological Seminary.

"I really want to plug my ears. I'm still struggling to manage my present, so how can I think of my future?" she asked.

"I believe that students commit suicide mainly because the education system in Hong Kong has problems and that too much pressure is imposed on students," Sui said. "In addition, there is pressure from parents."

More than 10 percent of Hong Kong students think of suicide, was one of the findings from a research team from the Hong Kong Polytechnic University. From that number, form two students (aged 12-13) are the most at risk with nearly 15 percent of them having suicidal inclinations. More than 5 percent planned to commit suicide and nearly half of those with suicidal inclinations have suicidal behavior.

The university research team in the early July published two follow-up studies which they have been doing for five and six years respectively. In the studies, they tracked more 10,000 secondary school students to better understand their satisfaction with life, suicidal tendencies, academic stress and school supports.

Both studies found that the level of satisfaction of secondary school students has been gradually decreasing from forms one to six (12 to 17 years of age).

Lawmaker Shiu Ka Chun agreed that students committing suicide was the result of Hong Kong education system putting too much pressure on them. "Students don't understand why they need to learn. They cannot see the future and think themselves as tools of their parents to get good results and a high paid job," he told ucanews.com.

However, there are principals, parents and teachers who believe student suicide is not caused by a single factor. Christian secondary school teacher Ng Kwok Ming points out that academic, family and interpersonal relationships are the triggers. "They are the problems that students face often. Many problems are cumulative and a trigger makes students commit suicide," said Ng.

Shung Tak Catholic English College principal Joseph Kung said, "We cannot comment on the whole situation while just looking at our school, we will say that study is a pressure, but not the first cause. The first reason is unhappiness and having problems with their families."

"What happens after students go home is difficult for us to control," he said.

Another lawmaker Fernando Cheung Chiu Hung told ucanews.com that the working hours of parents are affecting family relationships. Hong Kong's working hours are 50 hours a week, the longest in the world, according to a UBS survey.

"That is why we have been asking for legislation to limit long working hours," said Cheung.

A Catholic school teacher said she and her colleagues teach students to meditate with the "Psalms" and "Ecclesiastes," and also broadcast religious songs which have touched her students. They also teach students to respect life because it is God's gift.

Kung said he would refer to the core values of the Catholic Church and the "Half Full and Half Empty theory" to counsel his students.

"Learn to look at your cup of water as being half full instead of half empty. Learn to appreciate and have gratitude," Kung said. "With a positive view of life, we believe when God closes the door, He will open a window."