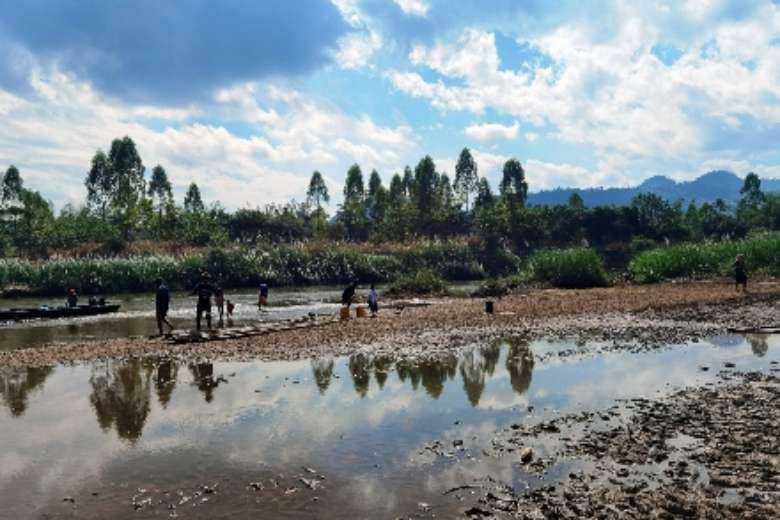 In Karen country along the Moei River, the Thai army has set up camps to house tens of thousands of Myanmar refugees. But these spaces are more like wastelands with no toilet and electricity. The river is the only source of water. (Photo: Carol Isoux)

On the banks of the Moei, the river that marks the border between Thailand and Myanmar, exhausted families take shelter under plastic sheeting stretched over bamboo.

At least 10,000 internally displaced people, mostly Karen, one of Myanmar's many ethnic groups, have flocked to the Myanmar side of Karen State in recent weeks to escape the army's airstrikes and artillery fire.

"We heard the planes coming one morning," says a young mother of four from the village of HteeHtawTalay, a newborn clutching her breast.

"Everyone started screaming and running. I gathered my children and we ran too. You can hear the bombing from here too, but it's safer from a little further away," she said.

Many have spent days, even weeks, in the jungle before reaching the border.

Since last March, several armed Karen groups have resumed fighting against the Tatmadaw, the Myanmarese army, and claim the death of hundreds of their soldiers.

So, since December, the Myanmarese army has preferred to use targeted airstrikes on villages suspected of harboring rebel fighters.

"The Myanmarese army no longer wants to fight on the ground against the Karen men, who know the jungle better," says Saw Taw Nee, in charge of foreign affairs for the Karen National Union (KNU).

The roads are becoming more and more dangerous

The volatility of the conflict in recent weeks has blurred the lines.

"Here, we used to consider this to be a territory of DKBA [Democratic Karen Buddhist Army]," explains a 70-year-old refugee in the village of Wa Lay, in Karen State, on the Myanmarese side.

"But right now, we don't know anymore... Myanmarese soldiers are shelling, moving in, moving out... The lines are moving. Villagers on the border say they hear artillery several days a week. The roads are more and more dangerous," he continues.

"When you come across a checkpoint, you're not sure which group you're dealing with. Many displaced people prefer to stay in the forest," he added.

Similarly, alliance games are blurred. The DKBA, previously accused of collaborating with the Myanmarese army, is now being targeted by air raids; the Karen media.

Villagers claim that an unprecedented collaboration with the KNLA-KNU (the Karen National Liberation Army, with a Christian majority) is taking place in some territories.

Most refugees do not dare to cross the border into Thailand for fear that the Thai army will arrest them and place them in sites to house the fugitives that have emerged in recent weeks.

These camps are actually more like vacant lots than real camps: no toilets, no electricity and the river as the only access to water.

These spaces function on the principle of "no man's land." From these camps, under the control of Thai soldiers who distribute basic necessities to the refugees, it is possible to reach Myanmar freely, without control.

On the other hand, it is impossible to leave the camp to travel to Thailand. Checkpoints have been installed on all the roads around the camp on the Thai side.

In recent days, hundreds of refugees have preferred to return to Myanmar, despite the risk of bombing, because of the "unbearable living conditions" in the Thai camps, according to the local media.

Among the PDF (People's Defense Force), groups of young Myanmarese who have come from the cities to train for armed resistance with the ethnic armies, some manage to cross the border clandestinely to take refuge in Thai peri-urban areas.

In a small house in one of these anonymous areas, "Neo," a young restaurant owner from Rangoon, "Lady Gaga," a Karen seamstress from Myawaddy, three other young people and their military instructor live together.

They had come full of enthusiasm, from all over Myanmar, to join forces with the Karen army against the junta. But they soon came up against the economic reality of the guerrillas.

"There weren't enough uniforms for everyone, no shoes, no socks, and barely enough food," says Neo. "We didn't eat meat for six weeks, except for a frog."

Not to mention military resources: "We had seven guns for 40 people. Each trainee was allowed to fire two bullets for the duration of the training, which was to last three months."

But after six weeks, the Myanmarese army's firing on their base began. "We had to flee," Neo admits. "How were we supposed to fight, without weapons?"

They do not hide their disappointment with the NUG (opposition government in exile), which received donations from the Myanmarese diaspora, and which had promised to support PDF movements throughout the country.

"They have a right to be disappointed," says Maw Htun Aung, deputy minister of energy.

"But we are operating under very difficult circumstances. Without international legitimacy, it's impossible to set up humanitarian aid, buy weapons or provide any kind of necessary assistance to these young fighters on the ground," Htun Aung said.

It raises the question of the position of Western countries "who salute the courage of the Myanmarese" but do not undertake "any concrete action" to help them.

For months, representatives of the Myanmarese civilian government in exile have been holding numerous meetings with Western institutions, but no government has yet taken the step of recognizing the NUG as the legitimate government of Myanmar.