What did Pope Francis say when he ran into Cardinal Tagle?

The cardinal kept a congregation amused and enthralled at a church event in Muntinlupa City. 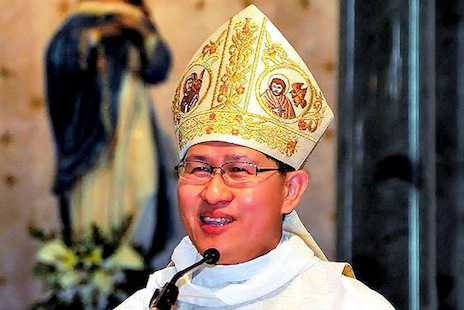 “Oh, look at this young boy,” the man in a white robe said, stepping out of the elevator.

The man was Pope Francis, elected Pope just the day before. The “boy” was Manila Archbishop Luis Antonio Cardinal Tagle, on his way to lunch in a black shirt and sweater. Tagle did not expect the encounter.

Tagle, feeling improperly dressed as he faced the Pope, felt embarrassed. The Pope reached out and touched the sweater.

“This is a sporty look! I like the way you look,” Pope Francis told Tagle, smiling.

“Ako, hiyang-hiya (I was so embarrassed),” Tagle said. “But the Pope knows how to put you at ease. He spontaneously reaches out to all,” he said as he regaled last Monday’s churchgoers at a Lenten activity of St. James Parish, Ayala Alabang in Muntinlupa City.

Seat reservations were strictly prohibited. Days before, parish priest Msgr. Albert Venus had asked Mass goers not to send their “yayas and drivers” to reserve seats as villagers are wont to do. So as early as 6 p.m., people started filing into the church for Tagle’s 8 p.m. talk.

At the Mass prior to the talk, the officiating priest started his homily with: “I’m glad to see people filling up the front rows first. Usually, people stay at the back!”

Such was the excitement in the church as all awaited Tagle’s first speech in St. James as a cardinal.

Tagle as usual kept his audience at the edge of their seats. His talks teemed with anecdotes. He paused, let silence still the air a few blinks, and tilted his head every time as a prelude to painting vignettes about the “conclave … alam ko interesado kayo ’dun (I know you are interested in those)” and about his own experiences.

Before he left for Rome to attend the conclave, he said he shunned newspapers, television and even his e-mail. There was much speculation on who would be Pope, and his name constantly cropped up.

“Part of the discipline we cardinals were told to possess was ‘focus’ so we could listen intently to the Holy Spirit and ward off other ‘spirits’ of ambition, of ah, sikat ako, ganun (my being famous, things like that).”

The airport scene in Manila surprised him. Media people jostled to get their soundbytes, quotes and photos. The cardinal said they were even interested in his passport.

“Baka maging (this might become a) relic” one day, they told him. He was so uncomfortable he tried to get the person next to him to smile.

Rome was another surprise since he thought he would be unknown there.

“Cardinale de Filipino!” shrieked those in the historic city of Rome.

While en route to a meeting at the Vatican in a car provided by the Collegio Filippino, home in Rome to visiting or studying Filipino clergymen, a group of students happened to spot the cardinal.

Taking one look at him, they called out, “Il Papa(bile) Cinese!” mistaking him for a Chinese. Tagle promptly put his hands together and, in true Oriental fashion, bowed low.

When invited to dinner one night at a restaurant, an Italian family at a nearby table saw Tagle.

“Wait a minute, are you the one from the Philippines?” they asked him.

Not long after, the entire restaurant went agog over the Manila archbishop’s presence. “At binigyan ako ng libreng (And they gave me free) dessert,” he said.