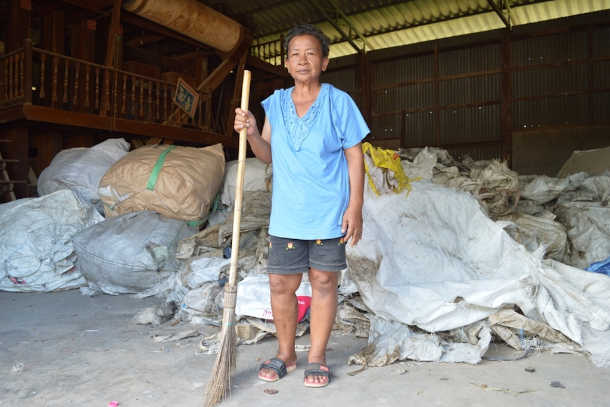 Riam Pheungkasem earns a living from cleaning waste bags in Khao Hin Son in Chachoengsao province but is worried about the health effects of illegal recycling plants burning trash at night. (Photo by Veena Thoopkrajae)

Buddhist monk Pharatikan Chayaphat Kuntaw is worried. He, his fellow monks and nearby villagers regularly have to deal with pollution coming from a nearby factory that burns waste at night.

If the wind is in the direction of his pagoda, it causes health issues. “The smell is really bad. It causes headaches and nausea. If you’re eating and that smell comes toward you, you feel like throwing up,” said Pharatikan.

An older lady, who came to the pagoda to ask the monk for his blessings, overhears the conversation. She knows all about the pollution. “It’s very severe at 1 o’clock at night. One time I had to throw up because of it. Another time I had difficulties with breathing. I had to go to a doctor,” she said.

Thailand’s waste import industry has grown rapidly in recent years. In 2016, the country imported 69,487 tonnes of plastic waste from other countries. In 2018, that number had grown to 481,381 tonnes, almost seven times more than two years earlier, statistics from environmental group Greenpeace show.

Most of the waste — mainly plastic and discarded electronics — comes from European Union countries, the United States, Japan, Hong Kong and Australia. While some of it is recycled by licensed companies, a huge amount ends up in places like Khao Hin Son, a village about 100 kilometers east of Bangkok in Chachoengsao province. Numerous small, shadowy industrial complexes have popped up in recent years. Many dump trash illegally or burn it at night.

At the unnamed factory near Wat Boonyaram, the temple where Pharatikan serves his time, a sign says that the factory is recycling copper. But with no outsiders allowed inside the plant, Pharatikan has concerns about what’s really happening and the long-term impact it has on people’s health.

“A farmer who lives nearby saw his cattle getting slimmer and slimmer. He thinks it’s because of the factory,” the monk said. “And a woman recently died after being sick. Her daughter thinks she became ill because of smoke from the factory. The smoke was inside her house all the time.”

And it’s not just this one factory that has him worried. “There are at least four of five of them. We are surrounded by them,” Pharatikan said.

Villagers in Khao Hin Son are worried about pollution from this unnamed recycling plant. (Photo by Ate Hoekstra/ucanews.com)

After Malaysia and Vietnam, Thailand is the biggest importer of plastic waste in Southeast Asia. Just as elsewhere in the region, Thailand’s waste industry grew rapidly after China announced in 2017 that it was going to ban the import of waste because of the impact on the environment and people’s health. Companies then closed their businesses in China and set up shop in Southeast Asia.

In a report in June, Greenpeace said that ASEAN countries imported more than 836,000 tonnes of plastic waste in 2016. Two years later, that had increased to over 2.2 million tonnes, a surge of 171 percent. Meanwhile, many Southeast Asian countries already struggle with their own domestic trash.

About 10 kilometers away from Wat Boonyaram, Samian Muangkao works in her fields in Kok Hua Khao. The 67-year-old farmer grows cassava and peanuts. She has found electric wires and other types of e-waste between her plants. During heavy rain, waste from a nearby recycling factory enters her fields.

And that’s not where the problems end. Farmers had their groundwater severely polluted when a recycling factory dumped wastewater illegally. “Last year I didn’t have any peanuts on my plants, and all the cassava was rotten,” Samian said.

Investigations showed that the water in her area contains excessive amounts of lead, iron, nickel and manganese. Consuming it or using it to water crops can be dangerous, according to researchers from environmental organization Ecological Alert and Recovery Thailand. Farmers told ucanews.com that before the recycling company opened its doors, the groundwater was so clean that they could easily drink it without getting sick.

The villagers are angry but speaking out against the practices can be dangerous. In a report published in April, environmental group Gaia Trust noted that Thai environmentalists have been threatened by mafia figures after they complained about waste dumping. It brings back memories of Prajob Nao-opas, a Thai activist who was murdered in 2013 after he exposed the illegal dumping of toxic waste.

But increasing awareness and dissatisfaction are bringing a response. Several Southeast Asian nations have announced new laws to limit or completely ban the controversial imports. In recent months the Philippines, Malaysia and Cambodia have sent dozens of containers full of trash back to their countries of origin: Australia, Canada and the United States.

Thailand is also becoming more aware of the impact of waste on the environment and public health. The government says that by 2021 it will no longer accept the import of plastic waste.

For the villagers of Khao Hin Son, that ban may be too far away. “Right now, the government is not doing anything to stop it,” monk Pharatikan said. “The authorities say that the villagers agreed to it during public hearings. But these hearings were not public or transparent because they only invited a select group of villagers who were given money.”

Opposite the temple, Riam Pheungkasem sweeps a concrete floor with a broom. She is one of the people who earn a living from waste. She visits licensed recycling companies to buy the large bags used to transport waste. She cleans the bags, dries them and then sells them for a higher price. “I don’t know where the waste comes from but it’s good for our business,” she said.

But Riam lives and works just a stone’s throw away from one of the vague and shadowy recycling sites. She cannot deny that she has some concerns. “They burn the trash at night. It’s polluting and it’s irritating my nose. I worry about it even though the authorities are OK with it.”