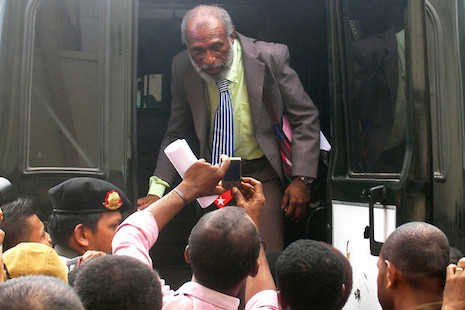 The activists were arrested in October 2011 for reading out a “declaration of independence” from Indonesia. Those released included prominent tribal leader Forkorus Yaboisembut, who was declared “president of the Federal Republic of West Papua” during the 2011 declaration of independence event; Edison Waromi, who was declared prime minister; as well as Agustinus Sanany Kraar, Selpius Bobii and Dominikus Sorbet.

Forkorus Yaboisembut, now age 59, told local media that the group had only been released because they had served their full jail terms.

“We will keep working together in the future until there is recognition [of our independence] and a transfer of sovereignty from the Republic of Indonesia to the Federal Republic of West Papua,” he said.

In 1969, Indonesia held a referendum known as the ‘Act of Free Choice’, during which a vote was held and it was subsequently announced that the population had decided to relinquish West Papua’s sovereignty in favor of Indonesian citizenship. Rights monitors and West Papuan activists claim that the referendum was rigged and have since agitated for a re-vote. However, any political activities aimed at independence have been met with swift punishment from the Indonesian government.

Earlier this month, six activists from the National Committee for West Papua were reportedly arrested and beaten for distributing leaflets calling on the West Papuan people to boycott the presidential election.

Fr Neles Kebadabi Tebay, who is a rector of Fajar Timur School of Philosophy and Theology in Abepura, told ucanews.com that the activists could face re-arrest if they continue agitating for independence.

“I, however, think that such arrests won’t solve the problem. The government of Indonesia and representatives of Papuans must sit together in a dialogue,” Fr Neles added.