Indonesia agrees to accept UN mission to check claims of rights abuses, but promises have been broken before 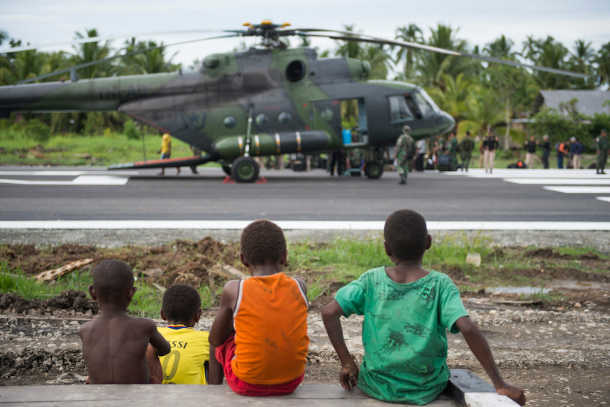 Three Papuan boys watch an Indonesian military helicopter at Erwer airport in West Papua on Jan. 27, 2018. It was part of a medical task force to tackle a deadly outbreak of measles and malnutrition in the impoverished region. (Photo by Bay Ismoyo/AFP)

West Papuan activist Benny Wenda described the petition he delivered to United Nations human rights chief Michelle Bachelet as “like the biggest book in the world." Containing 1.8 million signatures and weighing 40 kilograms, the petition called on the U.N. to send a fact-finding mission to the two easternmost provinces of Indonesia to look into persistent allegations of human rights violations.

Remarkably, Indonesia almost immediately acceded to a request by Bachelet to send a delegation. Indonesian ambassador to the U.N. Hasan Kleib was reported as saying on Jan. 30 that the government was scheduling the visit.

But such promises have been made in the past. A year ago, Bachelet’s predecessor Zeid Ra'ad Al Hussein was also preparing to send a team to the area. He expressed concern over excessive use of force by security forces, harassment, arbitrary arrests and detentions. Again, the Indonesian government said it was making preparations for a visit, but an invitation was never issued and the visit never took place.

Indonesia’s consistent policy of restricting access to the region raises questions about what it fears will be revealed if its rule over what it describes as the provinces of Papua and West Papua — which take up the very western tip of the island of New Guinea — is opened to scrutiny. Foreign journalists are officially allowed to visit but rarely get the opportunity. Most international NGOs are banned from the area.

Human rights abuses undoubtedly happen. Indonesian security authorities have a habit of acting tough with any public display of dissent. In the past blood has been spilled. In the most recent denial of the right to free expression, several activists were reportedly assaulted by the security apparatus, while hundreds of people were detained during a rally commemorating World Human Rights Day in several locations in Papua on Dec. 10.

Papuans studying in other parts of the country who try to express their political opinions on the streets often meet a harsh response from so-called “mass organizations” — hoodlum groups that work hand in glove with local authorities. Displaying the banned Morning Star flag can earn a lengthy jail term.

Such crackdowns have the effect of convincing Papuans that the Indonesian regime oppresses them. Papua’s population is estimated at 3.32 million, with at least a million immigrants from elsewhere in the country. That means the entire adult population of indigenous Papuans signed the petition expressing their discontent.

On the Indonesian side, there’s a blank refusal to accept any challenge to sovereignty. Indonesia argues that because Papua was part of the former Dutch colonial territory of the East Indies, there is no parallel with East Timor, the former Portuguese colony which won independence after a referendum in 1999. While there is wide criticism of the way in which Papuans acceded to Indonesian rule, the U.N. decolonization subcommittee has declined to take up the issue.

There’s minimal international support: Vanuatu, which allowed Benny Wenda to stow away in its delegation to the Human Rights Commission, is the only state that has actively supported Papuan independence. Neighbors Papua New Guinea and Australia want nothing to do with a separatist movement that threatens their relationships with Indonesia.

Armed opposition is active in the mountains, with the killing of 17 construction workers on the new Trans-Papua Highway on Dec. 1 the most extreme act of opposition to Indonesian rule for decades. Propaganda outfits are active on both sides, with the separatists alleging heinous crimes including the use of chemical weapons. With no way to confirm or deny such allegations, some of the claims stick.

Corruption, meanwhile, is a Papuan affair. In reaction to cries of pain from Jakarta that the money disbursed to the region under the Special Autonomy Law of 2001 was being wasted, Papua governor Lukas Enembe agreed to set up a committee of “competent” Papuans. He noted that the current regulation on special autonomy funds stipulates that 80 percent of funds allocated in the state budget are directly transferred to local governments, not all of whom are capable of managing the funds for the welfare of Papuans.

In Jakarta, the Home Affairs Ministry's director general for regional autonomy, Soni Sumarsono, called for revisions to the law due to several weaknesses, including a lack of control by the central government over local administrations. In 2018, Papua and West Papua received 5.62 trillion rupiah (US$404 million) and 2.41 trillion rupiah respectively.

With all that money, it’s amazing how little seems to get done in Papua and West Papua. Papua province tops the national illiteracy list with a rate of 29 percent. The lack of roads and other infrastructure means that logistics costs are literally sky-high, with light aircraft needed to take basic supplies into remote villages.

Yet government attempts to push roads into the highlands, like the Trans-Papua Highway, come under attack from armed separatist bands who allege that the roads are designed only to open up areas for more Indonesian oppression.

Early in 2018, some 800 children fell ill and as many as 100 others, mostly toddlers, are feared to have died in Asmat and Bintang Mountains regencies in what Jakarta called an "extraordinary" outbreak of disease. The combination of common diseases with malnutrition pointed to long-term problems in the regions.

Incidences of malaria and dengue fever remain high and Papua has the second-highest rate of HIV/AIDS in Indonesia after Jakarta. Papua lacks 3,200 medical workers, while at least 206 health clinics in the province, more than half of the total, do not employ a doctor and 89 percent do not have a dentist.

Some might ask why Jakarta keeps pouring money into the region for so little result. Papuans, meanwhile, resent a situation where they are ordered around and their land is invaded by Indonesians from elsewhere in the archipelago attracted by all the cash floating around the system. At the least, those 1.8 million Papuans have every right to complain that corruption, neglect and a failure of dialogue add up to abuse of their human rights.