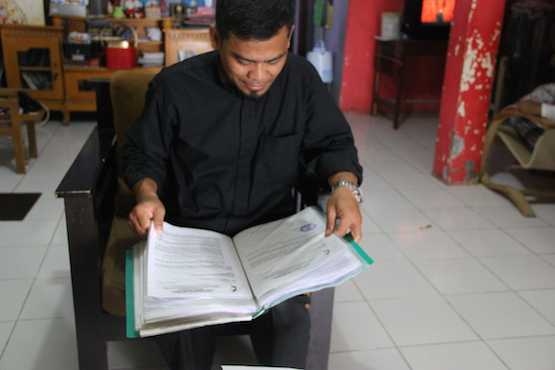 In West Java, a province known for its failure to maintain religious freedom, worship is not easy for many Christians.

Catholics and Protestants of three churches in Parungpanjang, Bogor district certainly felt that way in March.

Following pressure by local Muslims, the district head told them to stop using houses they usually used for worship.

The reason was the houses — one owned by Catholics and two by Protestants — did not have official permission to be used as houses of worship.

However, they have defied the order despite fears of a crackdown.

"Anytime, we can be raided," the Rev. Abdi Saragih, head of the Parungpanjang Methodist Church, told ucanews.com.

Both denominations say the pressure has been building against them over many years.

Worshipping is also difficult for Christian churches with legitimate licenses.

In Bogor, the Indonesia Christian Church (GKI) Yasmin has been shuttered since 2010, following pressure by Muslims.

Now, the church is filled with weeds and the exterior is almost covered by undergrowth.

In February, they were offered a ray of hope when the Bogor mayor said they could re-open the church if a mosque was built next to it.

However, church spokesman, Bona Sigalingging, said no progress has been made since then.

Since 2012, the congregation has held services outside the presidential palace in Jakarta to protest government inaction over their plight.

A similar problem is faced by St. Clara's Catholic parish church in Bekasi, which has a license but is suffering protests by Muslims. West Java has the highest number of incidents of religious intolerance, according to rights group Setara Institute for Democracy and Peace.

Last year, it recorded 41 cases with most incidents being carried out by hardliners.

This began to change after the fall of Suharto in 1998 with the rise of groups such as the Islamic Defenders Front, Indonesian Mujahidin Council and Hizbut Tahrir Indonesia.

In the last decade, they have been allowed to thrive under Islamic parties, like the Prosperous Justice Party (PKS) ruling the province, Naipospos said.

He said said some regional politicians appear to be working hand in glove with hard-line groups.

"They use radical Islamic groups to be re-elected," he said.

"They believe these groups are machines to reap in Muslim voters."

Observers say more pro-Islamic rules and regulations have emerged as a result such as the banning of the Ahmadiyyah sect, which became a catalyst for radicals to commit violence.

The Muslim sect, which believe Muhammad was not the last prophet, is persecuted by mainstream Muslims.

The strong influence of radical groups has exposed minority groups as a whole to greater persecution.

The local government tends to appease the hardliners by claiming — often falsely — that minorities like Christians are flouting laws on religion.

Bogor district head, Nurhayati, recently said a local ban order on places of worship for Christians was imposed to maintain peace and harmony among religious believers.

"Christians are asked not to act against the law," she said.

Often they are told they do not have the proper permit or license to worship.

For Christians to get a permit to set up a place of worship they need to have at least 90 signatures from church members and the consent of at least 60 members of local Muslim communities.

However, according to Parungpanjang Methodist Church's Rev. Saragih, gaining a permit is not easy.

"The reality is that it is very difficult," he said.

Antonius Parno, a Catholic community leader, said local Christians do not deliberately try to violate the law and are actively seeking to obtain legal status.

"But, our neighbors are not willing to give us their support" he said.

For Fritz Fios, a Catholic in Bogor, fears about the future are growing following the success of hardliners in the recent Jakarta governor election.

Hard-line groups are expecting to win in other elections, including West Java's governor election next year.

"If they win again, our future will become more blurry," said Rev. Saragih.

"The situation will not change for the better."