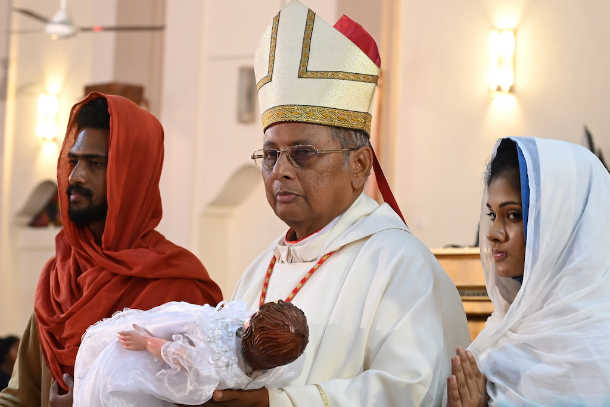 Cardinal Malcolm Ranjith attends midnight Mass at St. Sebastian's Church in Negombo on Dec. 25, 2019. The church was one of three churches that came under attack in deadly suicide bombings on Easter Sunday last year. (Photo: AFP)

Sri Lankan Catholics have forgiven the Easter Sunday suicide attackers who brought terror to the island nation a year ago, according to the archbishop of Colombo.

Cardinal Malcolm Ranjith said a group of misguided youths attacked the lives of people and aimed to harm Christians on April 21 last year.

"Not only did Catholics die but the bombs killed Buddhists, Hindus and Muslims," said Cardinal Ranjith as he celebrated Easter Sunday Mass on April 12.

"Selfishness could have been given as an answer by thinking about it as human beings, but at the time we paid attention to the message of Christ and loved those enemies who killed us.

"It is human nature to hurt people through anger, but we have given up that human nature and chosen the life of the resurrection of the Lord. Resurrection is the complete rejection of selfishness.

"We had pity on them and asked them not to repeat such things. We have taught them that lesson, not hating anyone in any way. This is what civilization means and that is the resurrection."

They carried out coordinated bomb attacks at St. Sebastian’s Church in Negombo, St. Anthony's Shrine in Kotahena and the evangelical Zion Church in Batticaloa.

St. Sebastian's Church and St. Anthony's Shrine were consecrated and reopened to the public, but Zion Church is still being renovated by the military.

Antony Camilus, a Christian activist from Negombo, said the shock and horror of the bombings have not subsided over the past year.

"Families still suffer due to the loss of their children and their parents. In some families, the loss of a breadwinner or the loss of a family member has caused them financial problems," said Camilus, who used to attend St. Sebastian's Church.

After the bombings, the general public and religious leaders blamed politicians and government officials for failing to prevent the attacks.

The Catholic Bishops' Conference of Sri Lanka and Cardinal Ranjith appealed to the government to appoint an independent commission to conduct an impartial inquiry and to bring the perpetrators before the law.

Former president Maithripala Sirisena appointed a presidential commission to investigate the bombings. President Gotabaya Rajapaksa also appointed a committee to undertake a formal inquiry and promised to give justice to victims.

Police have arrested 135 people in connection with the attacks.