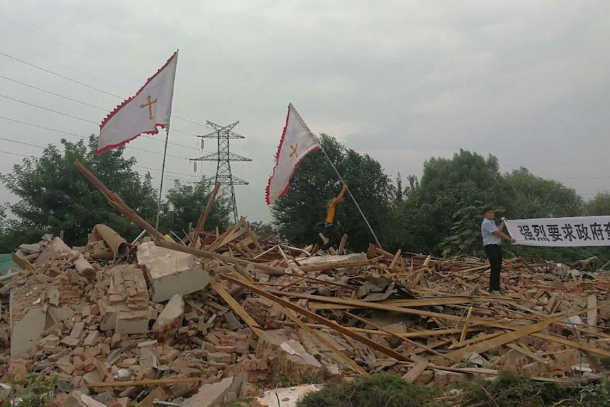 Catholics hoist flags bearing the sign of the cross and erect a banner urging the government to investigate the Aug. 13 demolition of Qianwang Catholic Church in Shandong province, China. (Photo provided)

After all the crosses were forcibly removed from churches and demolished in China's prosperous Zhejiang Province several years ago, the party began applying the same pressure in central Henan last year.

But this time round, their stepped-up campaign to suppress the religious freedom of Christians in China is proving even more egregious.

Now even subsidies for the elderly are to be deducted if they espouse religious beliefs, while parishes are being forced to hand over information about their members.

If all this were not bad enough, churches have been "requested" to hoist the national flag and sing the national anthem before every Mass.

The crackdown is also spreading to the Protestant Church.

Since the end of August, authorities in Henan have been removing crosses from Protestant churches around the province. According to the media, more than 7,000 crosses have been dismantled so far, far more than the 1,700 crosses demolished in Zhejiang.

Even the government-sanctioned Three-Self (Protestant) churches are not being spared.

House churches that refuse to sing the national anthem, or refuse to accept the core socialist values of the Chinese Communist Party (CCP), are being shut down and slandered.

Moreover, the state has sent "officials" to destroy their crosses, smash their pianos and furniture, arrest pastors, and beat up anyone who tries to resist. Church property has been confiscated and Bibles and hymns are burnt.

The Henan authorities are also merging a number of churches, while recent reports claim two-thirds of the churches in the province have already been shuttered.

At the same time, many preachers and pastors are being subjected to "political assessments." Only those who agree to promote the core values of socialism can continue preaching.

Officials are also asking church elders to persuade senior citizens to denounce their faith, the stick being that if they don't, they can fully expect their welfare subsidies to be revoked.

The crackdown on Protestant churches is intensifying in several Chinese cities including Beijing.

Authorities officially slapped a ban on the Zion Church, the largest Protestant house church in the capital, on Sept. 9 and its seven churches have since been closed, ostensibly for "organizing religious activities without registration."

Zion has been gathering steam for the last decade and now has around 1,500 believers.

In Wenzhou City, also in Zhejiang in eastern China, schools have been requested to investigate students' religious beliefs. Some now require that Christian students fill in a form stating they harbor "no religious beliefs."

In Guangzhou, in southern Guangdong Province, one pastor who tends to a house church was punished recently for the "crime" of hosting "illegal religious gatherings."

In Chengdu, in southwestern Sichuan Province, the Early Rain Covenant Church has been repeatedly disrupted by the authorities.

The leaders of house churches in China issued a rare statement at the end of August describing the current situation as severe and the suppression as being "unprecedented" and not comparable to anything seen in the country since the [1966-76] Cultural Revolution."

But regardless of whether those crying out for help in the face of religious persecution of this nature are Catholic or Protestant, and no matter if they are based in China or elsewhere, they are still a tiny minority.

When the crosses were demolished in Zhejiang, parishioners resisted and many urged the authorities to "cease and desist."

But the issue was ultimately left unresolved, as it seemed to be an isolated case with the "contagion" not looking like it would spread to other regions.

That now appears to have been an overly optimistic presumption.

The same kind of thing is being repeated in Henan and other Chinese cities. It is brutal and unreasonable and, sadly, the tide of opposition is weaker than in Zhejiang.

Questions are even being asked as to why overseas Chinese and Chinese churches appear to be turning a blind eye to the suffering of Christians in China.

We always say we are a universal Church; that we belong to one big family. But when the Chinese churches face such a predicament, where are we? Where is the universal Church? At it faces one of its darkest hours, why can it not hear our voice penetrating the darkness?

At this time, our brothers and sisters are being persecuted, yet most of us act as though it's just a case of "business as usual" and nothing extraordinary is taking place.

Is this what we call love and righteousness? If we don't express our concerns and objections quickly, there may not be any chance to do so in the future.

What is happening now in China reminds me of a poem called "First they came…" by the German Lutheran pastor Martin Niemöller (1892–1984).

I think it can be applied in all fairness to China today:

"First they came for the Tibetans, and I did not speak out—

Then they came for the Uyghurs, and I did not speak out—

Then they came for the Protestants, and I did not speak out—

Then they came for me — and there was no one left to speak for me."