Former member of the upper house parliament Hla Swe speaks during a protest in Yangon on Aug. 3 against the U.S., who banned Myanmar's military chief Min Aung Hlaing and three other officers from travel to the country. (Photo by Sai Aung Main/AFP)

A court in Myanmar has issued a warrant for a well-known nationalist and former lawmaker on a sedition charge for criticizing the country’s leaders.

Hla Swe, known as "Bullet Hla Swe," is wanted on the charges based on a speech he gave at a rally against recent U.S. sanctions held in Yangon on Aug. 3.

“What would happen if the Americans bombed the president’s office or the state counsellor’s or government’s offices,” Hla Swe told the rally.

“Come and bomb,” he shouted. “Let people from the government and secretariat offices die — that would be cool.”

Myanmar’s sedition law prohibits anyone from provoking hostility, hatred or contempt towards the government. The law has a maximum penalty of 20 years' imprisonment and a fine. Myanmar’s controversial anti-Muslim monk U Wirathu is also wanted under the sedition law after he allegedly made comments attacking the government.

Hla Swe retired from the military as a lieutenant colonel in 2006 and then became an upper house lawmaker for the military-linked Union Solidarity and Development Party (USDP) during the previous Thein Sein administration. He also ran the ultranationalist journal Bullet News.

A local administrator from Yangon filed the complaint against Hla Swe in Yangon’s western district court last week. Hla Swe is also facing another lawsuit filed by a Muslim leader in Yangon for anti-Muslim comments made at the same rally.

Hla Swe allegedly said the Prophet Muhammad would bomb the U.S. embassy if they posted insulting images of him. He was referring to a recent Facebook post by the U.S. embassy in Yangon featuring an environmentalist image depicting the Buddha wearing a gas mask.

Aye Lwin, chief convener of the Islamic center in Yangon, said that anti-Muslim sentiment is being fomented by nationalists for political gain.

“Their belittling of the government through both nationalism and anti-Muslim sentiment is attention seeking,” Aye Lwin told ucanews.com. Free speech comes at a price in Myanmar 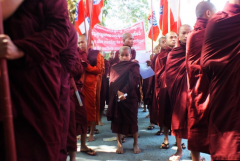 Rights advocates have raised concerns that the government has for too long failed to act against hate speech aimed at Myanmar’s Muslim minority.

Robertson said the Myanmar government sadly ignored other provocations and only acted when Hla Swe started speaking against the National League for Democracy (NLD) and its leaders.

“Again, what we see is protection of human rights is shunted aside until it is convenient to use them to strike back at a political opponent,” Robertson told ucanews.com.

He added no one should defend Hla Swe but certainly the NLD government has hardly distinguished itself by waiting so long to act.