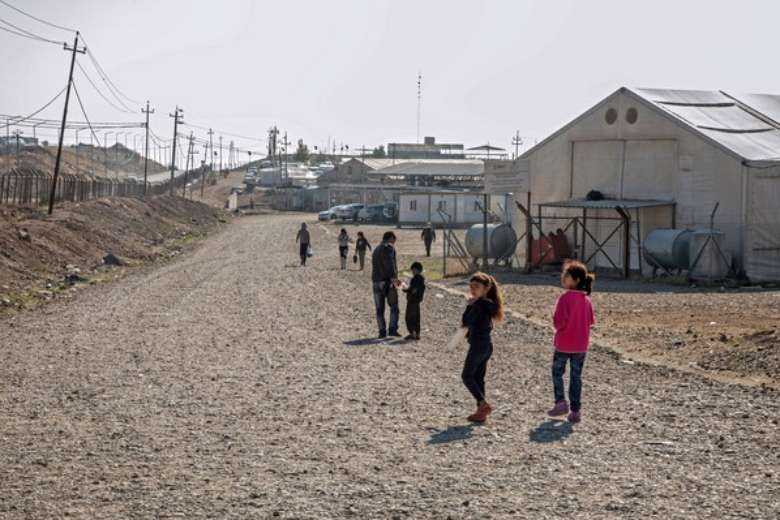 The Bajet Kandala camp for displaced Yazidis near Dohuk, 430 kilometers northwest of the Iraqi capital, by the border with Syria, on Nov. 18, 2020. (Photo: Florent Vergens/AFP)

The Syriac Catholic patriarch said the situation in Syria "continues to be humanly unbearable and devastating" and risks emptying the war-torn country of its Christian community for good.

Patriarch Ignace Joseph III Younan called on Western countries to lift "all economic sanctions against Syria because they only harm the innocent."

"The economic sanctions imposed on Syrian people by the Western governments in the name of democracy and political liberty have created horrendous consequences in a country that endured wars, siege and abandonment for over 10 years," Patriarch Younan told Catholic News Service on May 23 after visiting Syria.

"Ordinary people are suffering poverty that borders on starvation," Patriarch Younan said. He cited the lack of medicine, food and fuel for electricity and transportation.

The patriarch, who is based in Beirut, spent 10 days visiting three Syriac Catholic dioceses: Homs, in central Syria; Aleppo in the north; and Damascus, the capital.

"Despite the joy of the encounters and visits, one could not ignore the feelings of sadness and resentment in the heart of many," Patriarch Younan said.

The situation in Syria continues to be humanly unbearable and devastating

"I could read the signs of anxiety on the faces of parents fearing to lose their youth who are facing despair, despite the assistance of churches and Christian organizations," he said.

"I therefore call on Western countries to lift all economic sanctions against Syria because they only harm the innocent," Patriarch Younan said.

"Objective interventions are necessary for reconciliation between Syrian citizens inside and outside the country. Effective U.N. mediation would focus on the safe return of the millions of people who have fled to neighboring countries," he said.

"It is time for all people of goodwill, especially Catholics in Western nations, to understand that the situation in Syria continues to be humanly unbearable and devastating. It really risks emptying this war-torn country of its Christian community for good," Patriarch Younan stressed.

The Syrian-born patriarch, who led the Diocese of Our Lady of Deliverance for Syriac Catholics in the United States and Canada from 1986 to 2009, told CNS: "It is clear that the Western governments have had a wrong reading of the Syrian situation, its religious, confessional and ethnic diversity. They hastened to support the violent uprising, mostly for geopolitical reasons, imagining a democracy that is undoubtedly unfit for the Middle East region, that ignores the separation of church and state, religion and politics."

"Where there is no religious liberty, all other liberties disappear," he said.

"Christians, both in Syria and Iraq, have already experienced the harmful and even deadly consequences of the chaos created by the agglomerated media, the political pressures and the military intervention by Western countries," Patriarch Younan said.

He added that Christians in Syria were "extremely grateful" to international Catholic organizations such as Aid to the Church in Need, the Catholic Near East Welfare Association, L'Oeuvre d'Orient and other Catholic communities and individuals for their "outpouring of support and Christian solidarity, so crucial for the survival of their brothers and sisters of faith for the past 10 years."

In Aleppo, Patriarch Younan chaired the May 18-20 annual meeting of the Council of Heads of Catholic Churches in Syria with Melkite Catholic Patriarch Joseph Absi. Cardinal Mario Zenari, the Vatican nuncio to Syria, attended.

In his opening remarks, Cardinal Zenari noted that the economic sanctions implemented against Syria, including those implemented by the U.S., affect the most vulnerable Syrian citizens "in the heart of their daily life," so much so that "the garbage containers in the streets have become a source of food for the poorest."

Likewise, the participants addressed "the unjust sanctions imposed on Syria" and demanded that they be lifted, according to the final statement of the meeting.

The prelates commended Caritas Syria, noting that its humanitarian and social efforts have covered all Syrian regions and all societal groups, without discrimination. This makes "the church present and effective, and its witness visible among the needy and suffering people whose number increases from day to day."

In Aleppo, the patriarch celebrated Masses, blessed married couples, ordained two seminarians for minor orders, and presided over devotional rites for the Marian Month of May. He also inspected the restoration works of two very damaged sites: St. Elijah's home for the elderly and a cemetery.

In Homs, Patriarch Younan presided over devotional prayers for the month of May with a community that filled the restored Holy Spirit Cathedral. He reminded people that Syria "is one of the first countries that knew Christianity and knew Jesus."

Patriarch Younan assured the faithful: "No matter what happens to us, and the acts of violence, destruction, chaos and suffering that lasted more than 10 years ... we will remain the people of God and followers of Lord Jesus."

The patriarch also visited the Syriac Catholic Monastery of Moses the Abyssinian, also known as Mar Musa, which dates back to the sixth century and was reopened and revitalized by Italian Jesuit Father Paolo Dall'Oglio, who disappeared July 2013 in Raqqa. There the patriarch met the monastic community of four friars and four nuns.