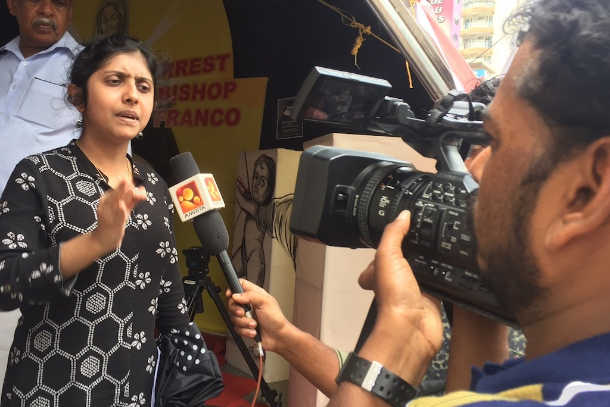 A Catholic lawyer who supports the nuns' demand for the arrest of a bishop speaks with media. Four nuns began a protest in Kochi, southern India Sept. 8 demanding justice for a nun who was allegedly raped by Bishop Franco Mulakkal of Jalandhar. (Photo by Christopher Joseph/ucanews.com).

"And they'll know we are Christians by our love," goes the song many Christians sing with their church choir, their hearts full of joy.

Recent media reports suggest many people are now best acquainted with members of the Christian clergy due to all the allegations of abuse they face around the world.

However, those who are supposed to act on the matter are not moving fast enough to set things right.

In one particular case in India involving the alleged rape of a nun, nothing has happened one year after the victim filed her complaint.

The sister claims she was raped by Bishop Franco Mulakkal of Jalandhar but the Kerala High Court decided in its interim order in a plea in mid-September that it could still find no grounds to prosecute the cleric.

The rape allegation by a nun from the Missionaries of Jesus, a diocesan congregation under Bishop Mulakkal, set off a media firestorm after four nuns from the congregation began a public protest in Kochi, the business capital of Kerala, on Sept. 8.

The protest began after police were suspected of dragging their feet by not having arrested the bishop two months after the nun first issued her complaint.

Several Catholic and civil rights groups threw their support behind the demonstrators in demanding the bishop resign and the police promptly arrest him.

A number of prominent theologians have also demanded that church authorities take action by forcing the bishop to step aside and assist with an impartial and fair investigation into the case.

They argued this would potentially embolden people under his care to come forward as witnesses without having to fear any possible repercussions.

Despite all these entreaties, the bishop remained in office for more than two months. Vatican officials removed him from diocesan administrative roles on Sept. 20, a day before police arrested him.

However, he did entrust his responsibilities to two senior priests Sept. 13 before he left his diocese in northern India for his native Kerala. The southern Indian Kerala state police have summoned him in connection with the case and he was scheduled to appear before them Sept. 19.

On the third day of his marathon interrogation, police recorded his arrest Sept. 21 and produced him in a court, which left him to police custody for further investigation. A lower court on Sept. 24 rejected his bail application and remanded him in jail till Oct. 6 to help investigations.

And yet, he officially continues to be the bishop of Jalandhar, with its administration given to a retired bishop.

Some argue that church laws protect clerics by stating that a bishop does not have to step down merely in the face of an allegation (it must be proved before such action becomes mandatory).

But if canon law allows a bishop who is facing charges of such gravity as rape to stay in office until a court of law finds him guilty, then that law is wrong and needs to be rewritten immediately.

If this leads to hundreds of bishops, priests and cardinals stepping down, so be it.

We are suffering now because too few Catholics have complained about clerical misconduct, and because whenever people do complain, they are routinely silenced, overlooked, or the investigation reports into their cases suppressed.

I have a doctoral thesis subject that may be worth researching for those who are interested: "The relationship between sexual abuse and the fall in church attendance."

Bishop Mulakkal is innocent until proven guilty. His clerical status should not give anyone the right to cast a stone at him. But he should have stepped down as he is a follower of Jesus, who said, "if someone takes your cloak, do not withhold your tunic" and "if anyone slaps you on the right cheek, turn to them the other cheek, also."

Far from turning the other cheek, the bishop has been busy making accusations against the nun in various media.

Sadly, some may ask, "are these Christian principles not applicable to the nun who made the allegation?" They are. But the nun has said she had exhausted all avenues before taking recourse in civilian justice.

She has named those in authority, including the nunciature and the Vatican, whom she approached with her complaint.

The same cannot be said of the bishop. As a citizen protected by the law of the land, he cannot be called into question for going public with his counter allegations in a bid to defend himself.

But does the moral teaching of the Catholic Church endorse this kind of behavior?

The law will now take its course, as it should. I'm willing to be humiliated for the acts and omissions of fellow Christians, but I want to know why the Church in India has not yet installed a formal mechanism to redress allegations of sexual violations and cases of embezzlement by priests, bishops or cardinals.

While we should leave the ultimate judgment to God, we have to render to Caesar what is Caesar's. It's bewildering to think that the Church, which has several formal organizations in place to deal with various social problems, doesn't have a formal or fair mechanism to deal with complaints of sexual harassment.

If Church law has no mechanism to act swiftly and justly against such allegations, it's a hollow law. If nothing else, it's time to start work on adding provisions to hold clerics more accountable for their actions.

To come back to the song I mentioned earlier ("And they'll know we are Christians by our love"), it was written by Peter Raymond Scholtes. He was a parish priest at St. Brendan's Parish Chicago in 1961 and the song was inspired by John 13:35 when Scholtes served as the leader of a youth choir.

He couldn't find a suitable song to present for a string of ecumenical and multiracial events his choir had to participate in, so he decided to write one himself.

It may be telling that he left the priesthood in the 1980s and led a successful family life. However, his experiences at St. Brendan's Parish, and with the civil rights movement in Chicago, influenced the rest of his life. He even wrote a bestselling book called "The Leader's Handbook."

Scholtes' biographer once said that when his publisher asked him why he wanted to cover the priest's life, he replied: "I want a book that will make a difference. I want my book to say that simple answers to complex issues will never accomplish anything worthwhile. Behind the complexity is a simplicity that we can come to understand only by struggling."

The challenges authority figures in the Church face are no doubt complex, and people may give simple answers that are not the proper solution.

But beyond all the complexity humans have created lies the simplicity of the teaching of Jesus Christ, which is the real answer.

Kay Abey is the pen name of a senior journalist and Catholic based in New Delhi.