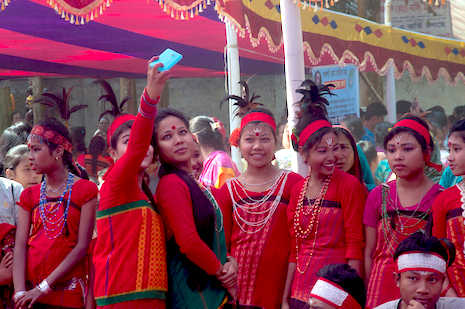 For Nithua Nokrek, the onset of winter is a highly anticipated time of year. It's a time when the 28-year-old woman takes a break from teaching in a school in Gazipur district, in central Bangladesh.

Nokrek, 28, a Catholic from the ethnic indigenous Garo tribe, heads back to her home village in Pirgacha, northeastern Tangail district to join her family and friends in celebrating Wangala, the largest Garo harvest festival.

To prepare for the feast, Nokrek, like other Garo women, looks for a new dokmanda — a traditional Garo dress — and helps the family clean the house and to prepare chu (rice beer).

"For every Wangala, I try to buy a new dokmanda and join my brothers and sisters in my home village no matter where I live. Together, we prepare for the feast at home and to welcome guests," said Nokrek, during this year's Wangala festivities being held at St. Paul's Catholic Church in Pirgacha on Nov. 15.

The parish priest has pioneered evangelization and development activities among Garos for more than 50 of those 60 years.

The celebrations attracted more than 10,000 people, largely Garo Catholics from Pirgacha, Jalchatra and Dorgachala — three nearby parishes in Mymensingh Diocese. Wangala is the main harvest and thanksgiving festival of the Garo people, a matrilineal tribe, living in Bangladesh and the Indian states of Assam and Meghalaya.

In Garo society, the mother is the head of the family, children take the surname of their mother, and only daughters can inherit family property.

Traditionally, Wangala is celebrated from October to early December. Like the celebrations at St. Paul's, thousands of Garos joined other gatherings in in Sherpur district Nov 19-20 and in neighboring Mymensingh district Nov 24-25.

The last of this year's Wangala celebrations was in Tejgaon, central Dhaka on Nov 27, which attracted more than 5,000 people who migrated to the capital for education and employment.

Like other festivals in the Christian world, the Garo's Wangala festival has its roots in pagan lore. Garo people largely followed an old religion called Sangsarek in which Wangala was celebrated to thank and honor Misi Saljong, the goddess of crops and fertility, and the main god Tatara Rabuga.

One of the main features of the feast is rugela (a sanctification ritual). During rugela, a Garo khamal (priest) puts some rice and vegetables on banana leaves and sprinkles chu on them while uttering a mantra, in order to sanctify and offer them to God.

In villages, people slaughter pigs for communal meals and drink homemade chu while celebrating the occasion with fanfare and merrymaking.

Apart from thanksgiving, Wangala is significant as it symbolizes unity and solidarity among Garos, says Ashis Nokrek, 29.

"Wangala is centered on thanksgiving. We believe God has created us, nurtures us, feeds us and protects us. So, we need to be thankful to him," said Nokrek, a Garo Student Union leader.

"Wangala ushers in a festive mood. People meet and get to know each other, and it works as a catalyst for national unity among us," he added.

Protestant missionaries began evangelizing among the Garo in 1863, while Catholic missionaries arrived in 1910. Today, about 99 percent of the estimated 120,000 Garos in Bangladesh are Christians — about 80 percent of whom are Catholics. The Garos' journey to Christianity has been marked with socio-economic advancements. With an 80 percent literacy rate Garos are the most literate among 45 ethnic indigenous communities in Bengali Muslim-majority Bangladesh. It also is higher than the national literacy rate, which stands at 60 percent.

The Catholic Church and missionaries have helped preserve the Garo language, culture and traditions since Vatican II, which allowed inculturation of liturgy in local language and culture.

"The faith of the Garos existed before they became Christians. They believed in the gods and we just baptized the society, their culture. We didn't destroy their culture, but we baptized it," said Fr. Homrich, the American missionary priest.

"They believe in God and they are good Catholics, they are holy people. They live in a Muslim country, but they have their own faith, own religion and they got these from their own society and culture," he added.

In Bangladesh, the Catholic Church has Christianized Wangala and incorporated it with the church feast of ‘Christ the King'.

"In the past we used to worship the goddess Misi Saljong, but now it's Jesus Christ. As a Christian I feel good about it. We have been able to practice our faith in Christianity by preserving our culture," said Nithua Nokrek.

The Christian transformation of Wangala is intended to preserve Garo culture and tradition, says Subhash Jengcham, a prominent Garo writer and researcher.

"The main purpose of the transformation of Wangala into Christian liturgy is to remind younger generations about our ancient religion, beliefs and how we expressed our gratitude to ancient gods. It's all about cultural festivities and there is nothing that conflicts with our faith or religion."