Employees speak out about 'heinous abuses' in Cambodia, India and Indonesia factories 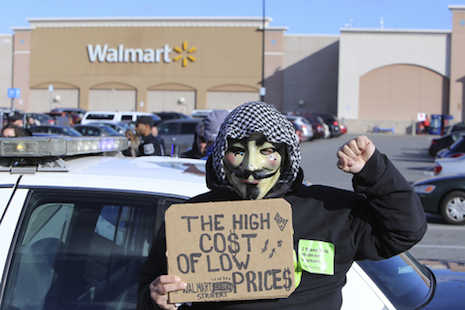 A demonstrator holds a sign outside a Walmart store in North Nergen, New Jersey in 2014 (Picture: a katz / Shutterstock.com)

By Alice Cuddy and Mom Kunthear for the Phnom Penh Post

Workers producing garments for global retail giant Walmart say they are subjected to a slew of workplace abuses ranging from forced labor to sexual harassment.

Employees at numerous Walmart supplier factories across the country have made the allegations, which were compiled in a recent study exposing the brand’s “heinous abuses” in three of the major countries in its Asian supply chain — Cambodia, India and Indonesia.

The study into Walmart, which was published by workers rights groups Jobs with Justice Education Fund and Asia Floor Wage Alliance, accuses the mega-brand of using its “large and complex supply infrastructure … [to] conceal the exploitation”.

It states that the brand, which Forbes lists as the world’s largest retailer, fails to take any responsibility for abuses in its supply chain, where in Cambodia alone it is estimated to indirectly employ 45,000 people through its supplier factories.

Leaked export records obtained from a source in the transportation industry show that more than 13,500 tonnes of Walmart garments and footwear were exported from Sihanoukville Autonomous Port last year to countries including the US, Canada, France, Germany and the UK.

But despite its investment in Cambodia giving the brand “huge leverage” to improve working conditions, Walmart remains “right on the bottom” when it comes to protecting workers rights, according to Joel Preston, a consultant with the Community Legal Education Centre, which authored the Cambodia section of the report.

“We’ve seen some steps from other brands to try and remedy abuses … but Walmart’s commitment to labor rights in Cambodian factories is next to zero,” he said.

In all of the 14 factories included in the study, workers told CLEC that they were being “subjected to forced labor of at least one form”.

While an average working week in a Cambodian garment factory is advertised as eight hours per day, six days per week, 86 percent of those who participated in the study “reported that their typical workday was 10 to 14 hours and that they did not have the option to leave the factory prior to overtime hours beginning”.

For many of the workers, the overtime itself was not voluntary.

“Many factories refuse to give permission to workers to leave before overtime hours are over, while other workers reported fear that their contract would not be renewed if they argued,” the study says.

Forced labor also extends to weekends, national holidays and even to times when workers fall ill, which is “particularly problematic” in the March to November hot season, as it overlaps with the industry’s 10-month peak-production period.

At this time, “mass fainting episodes regularly occur as a direct result of overexertion without proper nutrition”, it says.

Twenty-nine-year-old Kim Sokheng, a worker at Ghim Li (Cambodia), which the report identifies as a supplier of women’s apparel to the retail giant, said in an interview this week that she was often unable to take sick leave.

“They [the factory] need us to take sick leave in advance, but how can we know which day we are sick?” she asked. “The company should stop cutting wages when the workers are ill.”

But, Sokheng said, a strong union presence in the factory made her confident to protest against such “injustices”, which she said she was hopeful Walmart would address.

Her optimism, however, is not shared by everyone. Respondents at all 14 factories included in the study reported instances of union busting by factory owners.

Five of the factories did not allow unionization at all, while four had unions established and run by the employers, and two had pro-government unions.

“In at least one case, workers reported that management specifically blocked efforts to create a union or go on strike.”

Factory worker Soth Kunthea said in an interview that she was sacked along with about 2,000 of her co-workers last year from a Walmart supplier, Taiwanese-owned Juhui Footwear, after protesting against poor working conditions.

After a mass walkout of about 5,000 factory staff in September 2014, the firm allowed 3,000 to return to work, but not before violent clashes with police left dozens injured.

Kunthea said workers were only allowed to go to the toilet four times a day, and were often forced to work on weekends and public holidays. She claimed the factory hid such abuses from Walmart, ordering workers not to report them to the brand.

In nearly every factory included in the study, workers “voiced serious concerns about their access to clean drinking water and sanitary toilet facilities and about overheating”.

Other alleged abuses and exploitative practices included the unlawful use of fixed-duration contracts, insufficient medical facilities and sexual harassment by line leaders and supervisors.

At one supplier factory, workers reported that “tolerating the harassment made work easier and allowed them greater opportunities to earn benefits”.

Factories contacted for this story denied the allegations, insisting that they complied with Cambodia’s Labor Law.

“We always respect the law and avoid anything that would affect workers rights,” said Chan Davuth, administrative manager at the Cambo Handsome factory, adding “we often analyze the problems of the workers”.

Walmart, meanwhile, declined to respond to specific questions about the report but said it was committed to its Cambodian workers.

“Walmart is part of the International Labour Organization Better Factories Cambodia program, which covers all apparel and footwear factories in Cambodia,” the brand said. “In addition, we actively engage with other brands, NGOs and the Cambodian government to support better transparency and dialogue among stakeholders.”

However, the study argues that Walmart is in fact “notorious for being the most difficult large brand to communicate with”.

“Whereas other large brands, even those who have received negative attention in recent years, have representatives on the ground in Asian countries, Walmart remains one of the few large brands that do not provide local representation for compliance issues,” it says.

Preston of CLEC said problems in the supply chain could be directly attributed to Walmart. “It’s their absolute failure to monitor and to engage.”