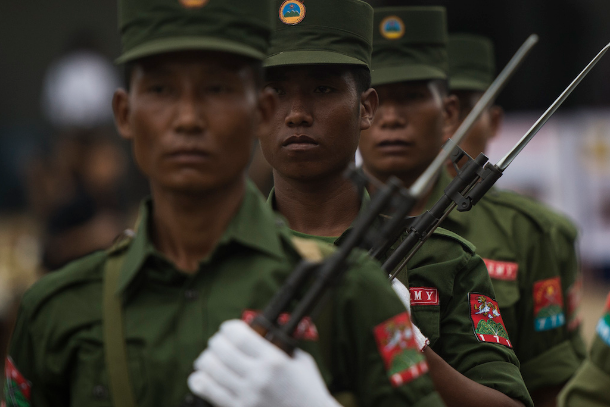 Members of the United Wa State Army stand guard near the Thai-Myanmar border in this June 2017 file photo. The 25,000-strong militia boast their own autonomous territories and have close links with Beijing. (Photo by Ye Aung Thu/AFP)

A third group of Catholic clergy have been expelled from Myanmar's Shan State by a China-backed ethnic minority army.

A priest from Kengtung Diocese in Shan State and three nuns from the Sisters of Charity congregation were ordered by the United Wa State Army (UWSA) to leave the Wa hills bordering China.

Local officials sealed off St. Paul's Catholic Church in Mong Pawk parish on Nov. 2 and told the clergy to pack their belongings and leave the region, according to church sources.

Father Raymond Than, a Salesian priest who was among clergy expelled in mid-October, said senior clergy from Kengtung Diocese went to Mong Pawk parish and met with senior UWSA officials to discuss the issue.

"The discussion was not successful, so the priest and three nuns had to leave the region on Nov. 8," Father Than, who contacted the expelled clergy, told ucanews.com. "We don't know exactly the reason behind the move." St. Paul's Catholic Church in Mong Pawk parish is under the control of the United Wa State Army in Shan State after being sealed off on Nov. 2. (Photo courtesy of Kengtung Diocese Social Communication Office)

The nuns have run a boarding school with around 100 children from the Lahu and Wa ethnic communities in Mong Pawk parish since 2006.

Sister Catherine Htay, superior of the Sisters of Charity congregation, said children had not attended the school since the nuns' expulsion. Wa officials have indicated there is no prospect of the Christians being allowed to return to continue their activities.

In late September and mid-October, three Salesian priests, eight nuns and nine lay teachers were expelled as part of a campaign in which the UWSA — which grew out of the Communist Party of what was formerly known as Burma — destroyed churches, detained pastors and closed religious schools.

The Lahu Baptist Convention has said that in Mong Pawk township 52 churches have been shut down, three churches destroyed, a Bible school sealed off and 41 students from the school forcibly recruited into the Wa army.

The UWSA leadership has deemed only churches built between 1989 and 1992 to be legal while banning construction of new churches, outside clerics and the teaching of religion in schools.

The 30,000-strong UWSA is accused of major involvement in drug trafficking.