At least 15 people including a group of students were killed when Indonesia’s Mount Sinabung erupted on Saturday, emitting hot ash clouds.

Sutopo Purwo Nugroho, spokesman of the National Disaster Mitigation Board, told ucanews.com on Monday that the number of dead could be higher, as emergency workers continued searching for other victims. Two other victims are being treated for high-degree burns, he said.

“All the dead victims were killed by ash clouds that travelled over 4.5 kilometers down the mountain,” Nugroho said.

The agency has warned people through media and web-based banner advertisements not to enter danger zones set at a five-kilometer radius from the North Sumatra crater, but some disobeyed the warning, he said.

Thousands of villagers were evacuated from their homes several months ago when the mountain began showing signs of increased volcanic activity.

Among those dead were seven university students and volunteers from the Indonesian Christian University Student Movement, who were trying to stop farmers from returning to their villages to inspect their plantations.

“They were trying to call the farmers back to shelters, as the volcano could erupt any time,” Supriadi Narno, the movement’s head, said. “But the volcano erupted while they were doing it,” he said

Narno said the movement has been active in serving evacuees since November. At weekends volunteers assist affected children, he said.

Reports say that the number of evacuees has reached 25,000. 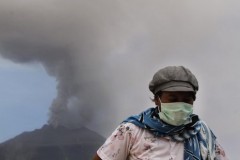 “I have warned [local people] to stay at temporary shelters. Be patient and don’t go back to villages if [the situation] isn’t safe yet,” he said.

“Obey officials. Stay away from the danger zone. Eruptions can happen at any time. Always stay alert and anticipate the worst possibility,” the president said.