Voice of the people does not necessarily come from God

Even when the Philippines is the last bastion of absolute marriage, the moral truth remains that divorce is against God's will 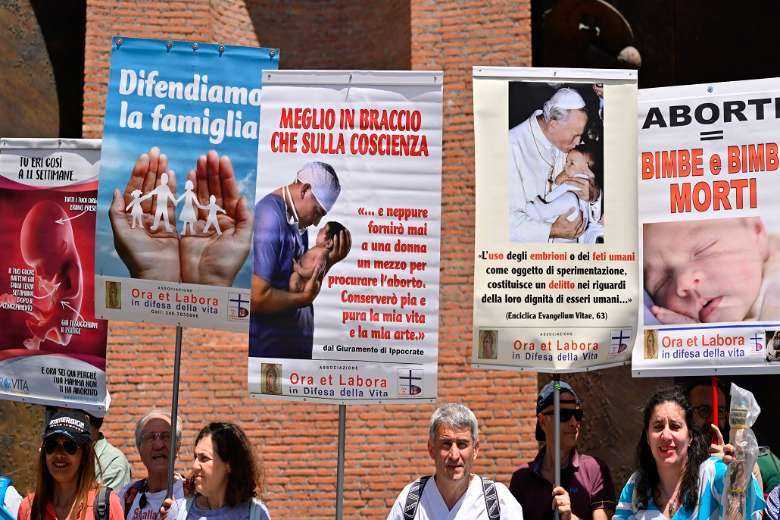 Activists take part in a march organized by the Italian pro-life movement in central Rome on May 21. One placard reads 'Abortions = Dead Babies'. (Photo: AFP)

Public opinion or the voice of the people, so derided in ancient Rome, turned out to be something treasured and pursued by many nations, especially after the French Revolution of 1789.

Historians consider the French Revolution as the dawn of democracy in Europe, riding on the principle that government derives its power and authority from the sovereignty of the people.

It was Niccolo Machiavelli (1469-1527), in his work Discourses on the First Decade of Tito Livio, who argued in favor of vox populi (voice of the people), not vox Dei, the voice of God.

“But as for prudence and stability,” the Italian philosopher writes, “I say how a people is more prudent, more stable, and of better judgment than a prince. And not without reason the voice of a people resembles that of God …”

However, being “Machiavellian” today suggests the values laid down by the same philosopher, specifically characterized by duplicity, cunning, manipulation or bad faith, like how the word “mesmerize” was named for Franz Anton Mesmer, a German physician of the late 1700s, “boycott” for Charles Cunningham Boycott, and “imeldific” for Imelda Marcos.

In logic, a subtopic of philosophy, argumentative fallacies include, among others, the so-called Bandwagon Fallacy, which refers to an appeal to the masses or democracy, appeal to the majority, argument by consensus and vox populi. This fallacy is perpetrated when a person attempts to persuade others into believing that a widely popular choice or public opinion is the correct one.

Abortion is evil and abominable, yet more than 80 percent of Americans say abortion should be legal and unrestricted

Therefore, vox populi non est vox Dei, the voice of the people is not the voice of God, wrote Saxon scholar Alcuin of York (735–804). He told Emperor Charlemagne circa 798: “The people are to be led, not followed. Nor are those to be listened to who are accustomed to say, vox populi vox Dei, since the riotousness of the crowd is always close to insanity.”

Genesis 1:27 teaches that “in the image of God, He created them; male and female He created them,” therefore — from the Christian perspective — being “male or female” is a divine design. Second, sexual complementarity naturally leads to fruitfulness or procreation and therefore — from the Christian perspective — same-sex marriage contradicts the basic truth of sexual complementarity.

Now, same-sex marriage came to many countries, such as Australia, through a referendum or a vote of what the majority desire. Abortion is evil and abominable, yet more than 80 percent of Americans say abortion should be legal and unrestricted. In both moral issues, the will of the majority is not the will of God because God cannot contradict himself.

Even if more and more contemporary Asians “strongly agree” with legalizing abortion, that profound shift in our attitudes cannot change the evil of abortion. Evil cannot become good just because it’s accepted by the majority.

According to the Social Weather Station report of March 9, 2018, more and more Filipinos agreed with legalizing divorce, as if saying: “Be open minded! Let those trapped in dead marriages be free.”

However, even when the Catholic Church is “now perceived to be increasingly out of touch with the concerns and challenges of the contemporary populace,” she still insists that divorce remains the same, that it is evil and immoral as ever. Why? Because our dear Lord values lifelong marriage and family: “Therefore, what God has joined together let no one separate” (Mark 10:9).

For more than 2,000 years, the Sacred Tradition and Sacred Magisterium have steadily defended the indissolubility of marriage as taught to us by Jesus. This doctrine will never change. Even when the Philippine Congress argues that Israel, the country of Jesus by birth, has a divorce law, and even when the Philippines is the last bastion of absolute marriage and the Vatican being the only other state with no divorce law, the moral truth remains — that is, divorce is against God’s will.

Towards the end of the Duterte regime, the culture of impunity, murder and plunder reached an alarming level that bothered the Catholic leadership, most especially the three archbishops of the solid north

“Enrile, Jinggoy Estrada, and Bong Revilla have been accused of plunder and Lapid still has to explain the source of the huge amount of US dollars his wife tried to smuggle into the United States. They could not have been God’s choice,” Oscar P. Lagman, Jr. of Manindigan has pointed out. “Ah, the voice of the people is indeed always close to madness, oftentimes it is madness.”

In September 2016, three months after taking power, Philippine President Rodrigo Duterte likened his bloody war on drugs to Hitler’s Holocaust. “Hitler massacred 3 million Jews [incorrect statistics]. Now, there are 3 million drug addicts,” he boasted, “I’d be happy to slaughter them.” The International Criminal Court prosecutor counted 12,000 to 30,000 dead bodies of civilians killed between 2016 and 2019 in connection with Duterte’s war on drugs. This can’t be the voice of God!

Amnesty International in September 2018 reminded President Duterte “to restore respect for human rights on the 46th anniversary of martial law.” The international organization recalled that, in playing the game of brinkmanship, Marcos Sr. declared martial law (1972-81) and ruled as a merciless dictator, leaving behind a legacy of 100,000 victims of martial law, 3,000 killed, 34,000 tortured and 70,000 arrested. This can’t be the voice of God too.

Towards the end of the Duterte regime, the culture of impunity, murder and plunder reached an alarming level that bothered the Catholic leadership, most especially the three archbishops of the solid north: Marlo Peralta of Nueva Segovia, Socrates Villegas of Lingayen Dagupan and Ricardo Baccay of Tuguegarao. In a joint pastoral message dated Sept. 12, 2021, the Filipino archbishops decried as if sounding an alarm: “Bullets kill. Viruses kill. Governance without direction kills. Corruption kills. Trolls kill with fake news. Hunger kills. When will the killings stop? The poor pay for the corruption of the powerful. The nation is sinking in debt.”

In conclusion, vox populi non est vox Dei doesn’t mean that the people’s choice is bad or the desire of the majority is evil. It only means that, in a democracy, the voice of the people doesn’t necessarily come from God.

* Jose Mario Bautista Maximiano is the author of ‘Catholic Social Teachings in Contemporary Philippine History: 500 YOC’ (Claretian, 2022) and ‘MDXXI: 500 Years Roman Catholic’ (Claretian, 2020). The views expressed in this article are those of the author and do not necessarily reflect the official editorial position of UCA News.