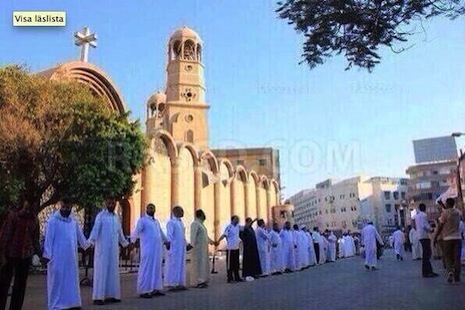 A viral photo showing Muslim men standing in front of a Catholic church in Egypt, protecting its congregants while they attend mass, serves as juxtaposition to recent reports indicating the growing attacks on Christians by Muslims in the North African country.

The photo, which has been circulated around the internet, shows over 20 Islamic men, wearing traditional Islamic dress, holding hands in a line in front of a large Catholic cathedral. The men are reportedly protecting the Catholic Church from vandalism and attacks while Christian congregants attend mass inside.

The picture has gained a wide amount of media attention after it was tweeted by the Rev. James Martin, S.J., a Jesuit priest and the author and editor-at-large of America, a national Catholic magazine. Martin, who has 30,000 followers, tweeted the image, and it was then retweeted by his followers more than 600 times and made a "favorite" nearly 300 times. "Hope for return of compassion and dignity," one Twitter user commented on the photo, while another commented "our world needs more of this."

Despite the image, many Twitter users remained skeptical of the situation in Egypt, arguing that Muslim Brotherhood supporters have been reported to have attacked dozens of other churches in recent weeks. "The peaceful actions of some do not cancel the violent actions of others," one user tweeted.