At least 22 people have died while 7,915 areas have been declared violence hotspots 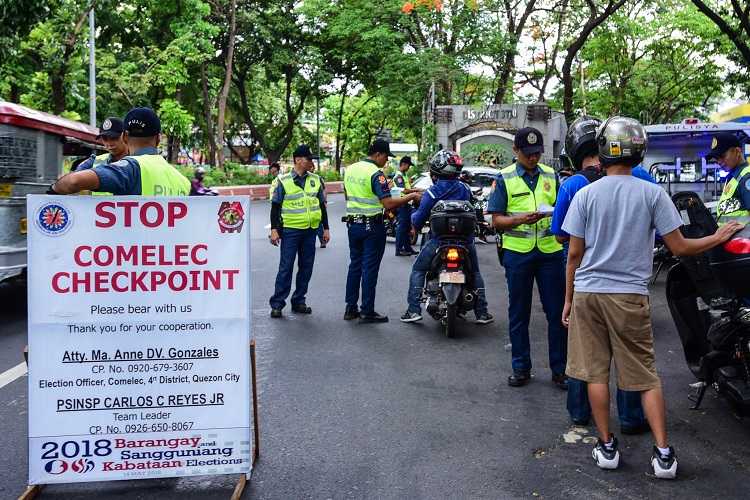 The Philippine National Police have set up checkpoints around the country, including in the national capital Manila, ahead of local elections on May 14. (Photo by Maria Tan/ucanews.com)

A sharp rise in election-related violence has been recorded in the run up to village and youth council elections in the Philippines on May 14.

Security officials said they have recorded at least 28 victims, 22 of whom were killed in what were likely election-related shootings from April 14 to May 9 this year.

On April 22, a candidate for village chairman in Basilan province in Mindanao was killed along with three of his relatives.

Witnesses reported that armed men attacked the residence of former village chief Usan Asani who had filed his candidacy to run for chairman of the village council.

In the city of Antipolo, a few kilometers east of Manila, a village leader was killed in another reported case of election-related violence.

Gunmen shot and killed Rufino Merca who was running as member of the village council.

Meanwhile, the Philippine National Police has also declared 7,915 "election hotspots" around the country.

National police spokesman John Bulalacao said 619 areas have been marked as "red" or areas that are "most critical," or most prone to violence among the hotspots.

There are 4,972 places marked as "orange" because of a high presence of armed groups while at least 2,325 areas have been marked "yellow," or areas that have a history of violence.

The police chief also called on candidates to show the world that Filipinos are civilized people and that they can conduct very peaceful elections "in an honest manner."

The church-based Parish Pastoral Council for Responsible Voting, which has been accredited as an election watchdog, will field about 200,000 volunteers who are trained to help if violence erupts on election day.

Antonio Villasor, executive director of the poll watchdog, said the probability of violence occurring during local elections "is higher compared to national elections because people in villages know each other."

"A candidate in a village election moves around a smaller community so he or she can easily be targeted," he said.

Villasor appealed to Catholics around the country to volunteer on election day "to fulfill our Christian duty and uphold the sacredness of the elections."

Archbishop Rolando Tria Tirona of Caceres, head of the social action commission of the bishops' conference, said the election is an "opportunity for change" that people should take advantage of.

The prelate said it can result in "better representation of issues and values at local government level."

Manila Archdiocese has issued a letter to parishes calling on people to pray for wisdom in choosing leaders "who will work for truth, justice, and the promotion of human dignity."

In the central Philippines, Archbishop Jose Palma of Cebu reminded people to "vote according to their conscience."

"Exercising our right to vote is a sacred duty. And so we must choose leaders not because they are our friend or because they gave people money," he said earlier this week.