The Catholic Church does not support capital punishment, but advocates for rule of law and justice, says bishop 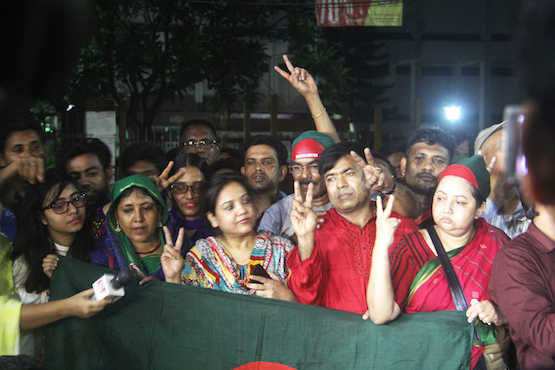 Secular activists cheer after Islamist leader Motiur Rahman Nizami was executed for war crimes in Dhaka in the early hours of May 11. (Photo by ucanews.com)

Bangladeshi authorities are bracing for possible violence after a senior leader from hard-line Islamist party was executed May 11 for atrocities committed during the country's war of independence from Pakistan in 1971.

Motiur Rahman Nizami, 73, chief of Jamaat-e-Islami party since 2000, was hanged in Dhaka central jail after he refused to seek clemency from President Abdul Hamid.

"Law enforcers are put on high alert in Dhaka and across the country to avert possible violence over the execution," said Muntasirul Islam, spokesman for the Dhaka police department.

Nizami was sentenced to death by the country's war crimes tribunal Oct. 29, 2014, for various war crimes including abduction, torture, rape and the killing of more than 450 people, mostly minority Hindus.

He was found guilty of leading Al Badr, a paramilitary group created by the invading Pakistani army. Among its crimes it was responsible for the killing of around 100 Bangladeshi intellectuals including writers, doctors, teachers and journalists.

The Supreme Court rejected Nizami's appeal against the death sentence Jan. 6 and a final appeal for a review of the sentence May 5. Police conduct security checks in Dhaka May 10 ahead of the execution of Islamist leader Motiur Rahman Nizami for war crimes. (Photo by ucanews.com)

Jamaat-e-Islami, Bangladesh's largest Islamic party, has called for three-day protest program including a nationwide strike for May 12.

Mokbul Ahmad, acting chief of Jamaat, termed the execution "a planned murder by the state" for "political vengeance."

"All the charges brought against Maolana Nizami were baseless and the state failed to prove them. Yet, he was denied justice. He is a victim of political vengeance," Ahmad said in a statement May 11.

A former government minister of the 2001-2006 Jamaat-backed government, Nizami is the fifth opposition politician and highest-ranked Jamaat leader to be executed for war crimes since 2013.

Other death sentences and executions have sparked violent protests from Islamists that have left about 500 people killed.

Set up by ruling Awami League in 2010, the international crimes tribunal has sentenced dozens of leaders from Jamaat and its longtime ally Bangladesh Nationalist Party, country's second largest political party.

Despite popularity among majority of Bangladeshi people, the tribunal faces criticism from international rights groups like Amnesty International and Human Rights Watch who termed the trial "procedurally flawed" and "falling short of international fair trial standards."

‘We stand for rule of law'

The Catholic Church does not support capital punishment, but advocates for rule of law and justice, said Bishop Gervas Rozario of Rajshahi, chairman of the  Catholic Bishops' Justice and Peace Commission.

"Our faith in Christ teaches that only God can give and take life, so we are not in favor of death penalty. But, we stand for the rule of law and justice, and anyone committing a crime deserves punishment," said Bishop Rozario.

"The punishment to Nizami is significant as it reminds and warns that no one should commit crimes against humanity," the prelate said.

"The execution of the verdict proves that criminals, no matter how strong or powerful they are, can be brought to trial and punishment if the nation and the state want to do so," Sarker said after the verdict.

"For 45 years, people of this country have continued a movement for the trial of war criminals to get rid off this national disgrace and it has paid off," he said.

The execution comes amid ongoing fears over the rise of Islamic militancy in Muslim-majority Bangladesh, which has experienced the killing of secular activists, writers, academics and foreigners as well as religious minorities.

Watch this ucanews.com video to see secular activists celebrate the execution of Islamist leader Motiur Rahman Nizami in Dhaka during the early hours of May 11.