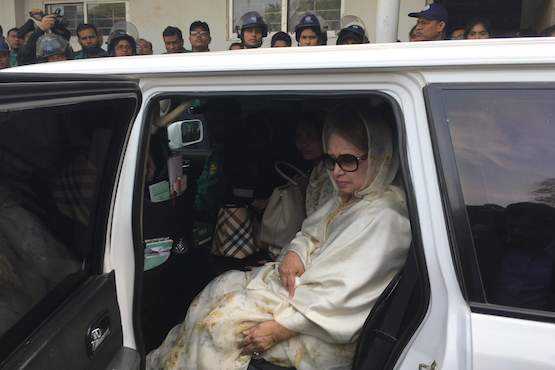 Former Bangladeshi prime minister Khaleda Zia is taken to jail after she was sentenced to five years in a graft case by a Dhaka court on Feb. 8. (ucanews.com photo)

Her son and heir apparent, Tarique Rahman, in exile in London for more than 10 years, and four other accused were handed down 10 years in jail plus fines.

A military-backed interim government filed the case against Zia in 2008. She repeatedly denied any wronging and labeled the charge as politically motivated.

Zia also faces 31 more cases in court, most of them politically charged and filed since 2009 by the ruling Awami League government of Prime Minister Sheikh Hasina, Zia's arch rival.

As the court announced the verdict amid heavy security, hundreds of Zia's supporters protested outside. Police used tear gas and batons and fired shots to disperse protesters.

Dozens of protesters and several policemen were hurt in the clashes.

Law Minister Anisul Huq said justice had been meted out for corruption.

"A senior political leader has been jailed for corruption and tarnishes the country's image. However, it also proves a corrupt person can be punished no matter how powerful the person is," Huq told journalists in Dhaka after the verdict.

Zia has every right to challenge the verdict in the Supreme Court and if she loses the appeal, she won't be able to participate in the upcoming general election, he added. Policemen inspect a fire set by Bangladesh Nationalist Party activists after Khaleda Zia was jailed by a Dhaka court on Feb. 8. (ucanews.com photo)

It will take up to two months to get a certified copy of the full verdict and Zia's lawyers are seeking to challenge the verdict in the High Court.

Ruhul Kabir Rizvi, the BNP's senior joint secretary, described the verdict as "an expression of a political vendetta."

"It was a government blueprint and our leader has been denied justice and been sent jail in a false case in order to harass her for a long time and to weaken our party. Without Begum Zia, Bangladesh's democracy and sovereignty remain unguarded," Rizvi said at a press conference.

"A person who commits a crime should get punishment, but the timing of verdict shows it is politically motivated. The government didn't file the case but it exploited it for political benefits ahead of an election. This verdict makes the judiciary questionable and put democracy in disarray," Nokrek told ucanews.com.

The BNP has announced a two-day nationwide protest for Feb. 9-10.

In Narayanganj district near Dhaka, at least one person died and 25 were admitted to hospital after BNP supporters clashed with police and ruling party activists.

Similar violence was reported in other parts of the country.

Since a return to parliamentary democracy in 1991 following 15 years of military rule, Bangladesh has seen Zia's BNP and Hasina's Awami League alternate power.

After years of relative stability, analysts fear Bangladesh could plunge into political turmoil ahead of the national election to be held at the end of this year or early next year.