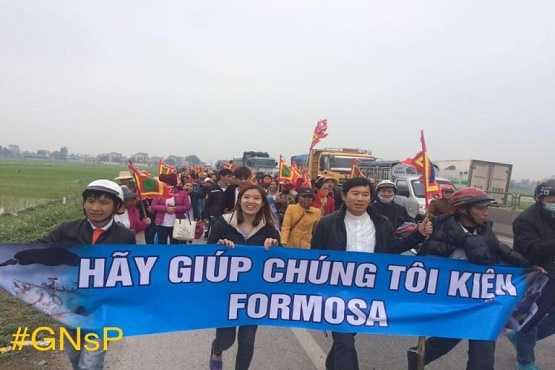 Diocesan leaders in central Vietnam have condemned government authorities for beating marchers and priests who were trying to file a lawsuit against a Taiwanese-owned steel plant that spilled toxic waste last April.

On Feb. 14, parishioners from Song Ngoc in Quynh Luu district in Nghen An province attempted to travel to the People's Court in Ky Anh town in neighboring Ha Tinh province to file their lawsuit. However, local authorities and security forces banned buses from driving them and blocked the roads.

Father John Baptist Nguyen Dinh Thuc, a parish priest, decided to lead the procession to court despite the police, intending to cover an estimated distance of 175 kilometers on foot or by motorbike. As they walked, they prayed for peace and wore T-shirts reading, "The people want fish to live. Formosa get out."

Their petition aimed at suing the steel plant owned by Formosa Plastics that reportedly discharged hundreds of tons of toxic waste into the sea in April.

Toxic waste, including phenol and cyanide, from the Taiwanese-built steel plant in Ha Tinh province poisoned water along a 200 kilometer stretch of coastline killing hundreds of tonnes of fish. The Formosa unit is based in Ky Anh district.

Numerous security officials and plainclothes police blocked the protester's path and told them to go home but the marchers refused. Then, the police beat anyone who videoed the situation or resisted in any way. They detained freelance journalists and injured Father Thuc.

Nghen An provincial authorities have seriously violated the civil rights of the people and their right to file a lawsuit, the Committee for Justice and Peace in Vinh Diocese said in a statement published on Feb. 17.

"We protest against the use of force in a brutal and groundless way against people when they were carrying out their civil rights peacefully," said Father Anthony Nguyen Van Dinh, head of the committee. He condemned the government for attacking and injuring Father Thuc.

Father Dinh also criticized the government for using its media to distort the truth, slandering marchers and violating their civil rights. He called on local parishes to pray for the victims and raise their voices to protect their interests.

On Feb. 14 Father Thuc told marchers that: "We are determined to arrive at the court to file our lawsuit even though it will take us several days to get there."

"It is important to sue the plant for causing environmental pollution. In so doing, we will not bring shame to our younger generations," he said, to applause from the crowd.

One marcher, who wanted to remain anonymous, said that getting Formosa Plastics out of Vietnam meant protecting the nation. "We work for justice and so we do not fear those cracking down on us."

Seeing as the police could not disperse the crowd entirely, the procession continued and rested at a church in Dong Thap on Feb. 14. Meanwhile, Catholics from neighboring parishes gathered to pray for them at their own churches.

On Feb. 15, Father Thuc asked 500 people to return home while he and their representatives carried on to the court, at the request of Vinh Bishop's House. However, a local priest told ucanews.com that Father Thuc has not filed lawsuits in the Ky Anh court yet due to restrictions from the government.

"Since then we have not received any reply from them. So we have to sue," he said.