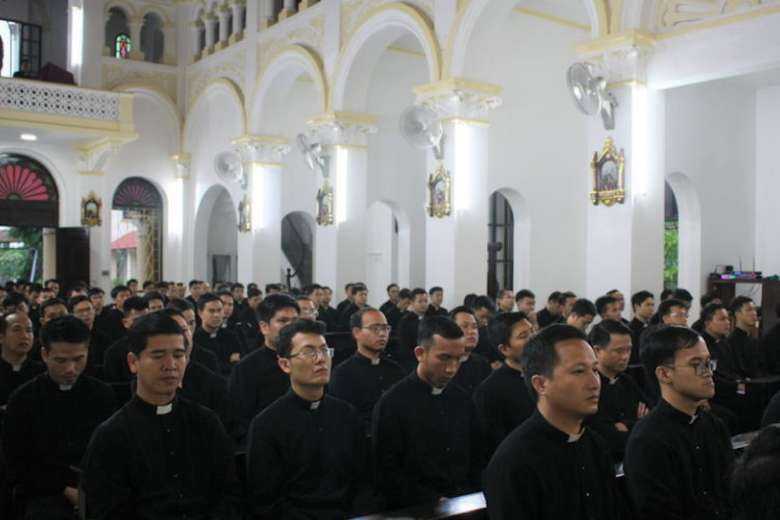 Seminarians attend a Mass in Sulpician Major Seminary in Hue in April. (Photo courtesy of xuanbichvietnam.net)

I am immensely impressed by Cassock Day celebrations. It truly touches me to see seminarians become tearful and delighted, but slightly embarrassed, to put on longed-for cassocks for the first time. The seminary rector tells them that “receiving cassocks marks a new stage in the process to follow God. From now on, you must live a life different from that of other youths.”

I look up at my cassock and tell myself that I have had such an experience and state of mind. Many questions come to my mind immediately: After years having studied in the seminary, am I a man of God? Am I a man who has been changed to be similar to God? Am I really different from others?

The Cassock Day ceremony marks the start of a new life that is to sacrifice our hearts and souls and receive the black soutanes of loyalty and love. I am selected to wear the ankle-length garment not because I am better, wiser or worthier than others but only because of God’s love.

It is said that “garments do not produce monks” but religious garments are a sign of devotion and poverty and some people lead a consecrated life only because they love the color of the garments. Religious garments also contain expected holiness in clerics, monks and nuns as they are said to be gentle and handsome.

To wear cassocks to attend Masses and liturgical functions is not to be given respect and priority by others but to show that we belong to God as people of God. Consecrated life is nothing but to choose Christ and walk on his path.

The soutane reminds me about a choice of giving up myself, for the narrow path of the cross, for dying for the world. Giving up does not beggar my existence but deepens it. It is a path to sanctify myself in order to sanctify others. The unreasonableness of the cross is the ground of love: dying for the world to live forever in God’s love. The time to be put to the test is an opportunity to grow up.

I am only a sinner among sinners, have temptations and challenges, and am attracted to worldly desires

The cassock also shows a choice of living out evangelical counsels — black is of poverty and chastity and the ankle-length garment refers to obedience. The garment with 33 buttons, which is not donned and taken off quickly, reminds seminarians to highly value God’s invitation and the high ideal of priesthood they pursue.

However, cassocks are not the garment of saints as wearing them is not enough to be holy. Behind them are men who have human faults, weaknesses, failings and emotions. Seminarians are mysteries to themselves. On the one hand, they are characterized by talents and gifts that have been molded by grace; on the other, they are marked by their limits and frailties of human nature.

I am only a sinner among sinners, have temptations and challenges, and am attracted to worldly desires. If I live up to the sign of the Cassock Day ceremony, I easily become holy thanks to the cassock that serves as a suit of armor quietly protecting me on the way to worship God and serve people.

Sometimes the cassock becomes much too tight since I pay much attention to ascesis, seeing consecrated life as heavy instead of a grace. I ignore the grace to be in God’s house to dream about worldly pleasures and do my private will instead of taking priority over seeking and performing God’s will. The cassock reminds me to follow Christ, who made himself nothing, and give up my own intentions.

The cassock becomes too loose as I seek safety for myself, avoid my responsibility, do my duties for form’s sake and utterly disregard people in need. The cassock gets me to die for my own greed and selfishness.

My cassock is fading because I quickly forget my vows in the Cassock Day ceremony and flinch from difficulties and challenges. I am encouraged to die for my human frailties and changeability.

Many times I am called on to leave my flesh and sins every time I have made my soutane dirty by committing sins and forming bad characters.

St. Josemaria Escriva said: “How pitiful is a man of God who has fallen away! But how much more pitiful is a man of God who is lukewarm and worldly!” Indeed, consecrated life fails to waken up the world unless clerics, monks and nuns wake up first. I am called on to integrate myself into the world, not vanish off the face of the earth, and to change myself to become better. I must overcome temptation to deliver me from the evil, so if I follow God by half, my life is in vain.

Consecrated persons must respect the world and people but scorn all evil and trivialities. I am still a young man with lots of desire, but I am encouraged to purge myself of worldly wishes and to crave holiness, God and souls. The late Cardinal Nguyen Van Thuan described it as being “among and for the world with its means but not by the world.”

It is necessary to have good images of seminarians today so that in the future we could have shepherds after God’s own heart: holy, enthusiastic and devoted to serving the Church. Seminarians must bravely say no to what is unsuitable for their vocations and steer clear of spirits of the world while daring to swim against the current without being washed away. The perfect path is not achieved if they fail to give themselves up and fight against human weaknesses.

To be a disciple is an endless experience and the process of following God requires me to take constant hard efforts to devote myself to God forever. Believing in God’s help, together with the cassock, I firmly go ahead with faith in words: Each of you should give as you decided personally, and not reluctantly, as if obliged. God loves a cheerful giver.

This article was summarized and translated by a UCA News reporter from a Vietnamese article published on gpbuichu.org here.