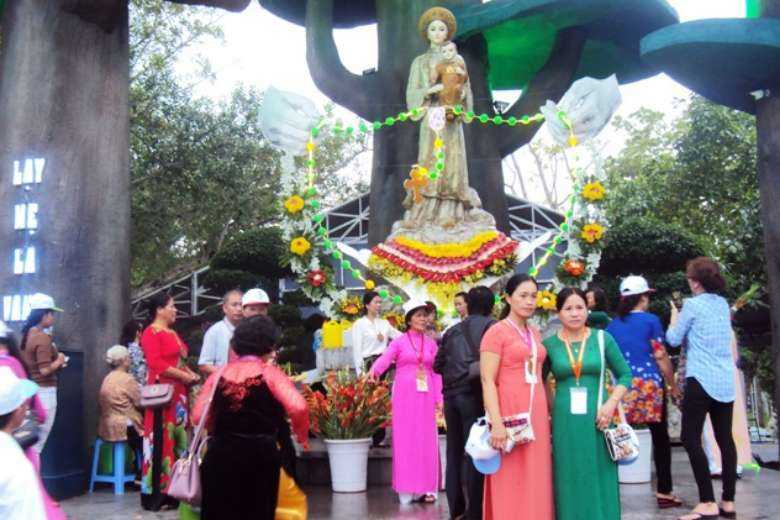 Mary Nguyen Thi Nhai daily decorates her altar of Mother Mary with flowers and says prayers in front of a Vietnamese-style statue of Our Lady of La Vang for her family to be in peace and good health.

Her four-member family gather before the altar to recite the rosary in the evening and morning.

Nhai, 40, got the statue and some rosaries during her first pilgrimage on May 9-13 to the National Shrine of Our Lady of La Vang in Quang Tri province.

“We are delighted to find peace in our souls and increase our devotion to Mother Mary after the pilgrimage,” the mother of two said.

The woman, who trades used items and bedding for a living, said her business is gradually picking up after a slack period of two years due to the prolonged Covid-19 pandemic.

Nhai, who serves as deputy of the Good Mothers Association based in Yen Bai Parish in Yen Bai city, said other members came out of their depression caused by the pandemic and are enthusiastic about their apostolic work.

Forty members from an association for laywomen made a five-day pilgrimage by bus to the Marian shrine some 800 kilometers away from their parish. Some also had their husbands and children join the trip.

During their first pilgrimage to the shrine since the association’s establishment 17 years ago, they attended Masses, performed a traditional dance offering flowers, bought pictures and statues of Our Lady of La Vang in traditional Vietnamese dress and hat, and visited some religious sites including Binh Dien Parish that is home to Van Kieu ethnic villagers. They also donated 13 million dong (US$565) to the remote parish’s evangelization work.

“The pilgrimage aims at keeping our spirits up and encouraging us to be active in charitable services after the pandemic that damaged our mental and physical health for the past two years,” Mary Nguyen Thi Lan, head of the group, said. Most members were infected with Covid-19, kept in hospitals and quarantine centers, suffered from anxiety and depression, and became jobless.

Lan, 71, said the pandemic also prevented them from cleaning church facilities, serving as choir members, attending Masses and Eucharist adoration, offering flowers to Mary and coming to the aid of people in need in remote areas. Consequently, their faith declined markedly.

They resumed their services in April after the contagion was contained.

“It is a miracle for us to have survived the health crisis. So we joined the pilgrimage to express our deep gratitude to God and Mother Mary,” Lan said.

“Now our high priority is to popularize the passionate devotion to Our Lady of La Vang for other people by doing ritual dance and offering flowers at churches,” she said, adding that they also raise funds for Catholic communities in remote areas. Good Mothers Association members from Yen Bai Parish dance with colorful fans in front of the Our Lady of La Vang statue on May 11. (Photo: UCA News)

On May 23, they danced and offered flowers to Mother Mary for the first time at My Hung Church, 40 kilometers away from Yen Bai. They also provided money and furniture to the parish.

Lan said they plan to visit mission stations that are home to ethnic villagers and lack facilities in the northwestern province of Son La in October.

Vietnamese people including followers of other faiths and from abroad eagerly visit the 224-year-old shrine at least one time in their lives, especially on Aug. 15, the feast day of the shrine.

Mother Mary is believed to have appeared many times and consoled and encouraged them to pick leaves to cure diseases picked up in the thick jungle.

She is believed to have told them: “Trust me as I have answered your prayers. From now on, I will bless those who come to appeal to me in this place."

Many survived and were later able to return home. In 1860, local people erected a leaf chapel for prayers at the shrine. Since then they have used leaves and water from the shrine for physical and spiritual treatment.

Archbishop Joseph Nguyen Chi Linh of Hue, president of the Catholic Bishops’ Conference of Vietnam, chose Our Lady of La Vang as the patroness of Hue Archdiocese in 2020.

In recent years, many parishes have erected big statues of Our Lady of La Vang so as to foster Marian devotion among local people.

On May 13, Father Peter Nguyen Van Doi, pastor of Thing Long Parish in Bui Chu Diocese, which is a cradle of Catholicism in Vietnam, inaugurated an Our Lady of La Vang statue in the compound of the church.

Some 300 people in traditional costumes danced and offered flowers in front of the Marian statue.

“All of us would have been killed if the shell had hit the yard, so we really believed Our Lady of La Vang saved us”

Catholics from northern dioceses could not visit the National Shrine of Our Lady of La Vang during the wars from 1955 to 1975.

Bartholomew Nguyen Anh Hien from Tri Buu Parish, near the shrine, said the story of Our Lady of La Vang's apparition has gone into people's hearts and spread from generation to generation.

Hien, who has three children and six grandchildren, said he spends Saturdays and Sundays praying and attending Masses at the shrine where “I feel a divine atmosphere and raise my deep devotion to Mother Mary.”

He said his family use leaves and water from the shrine and daily pray at home, so they have not been infected with Covid-19.

The 72-year-old Marian devotee said he started to dedicate himself to Mother Mary in May 1968 when a mortar shell burst just behind his house while his family of 11 members were reciting the rosary.

“All of us would have been killed if the shell had hit the yard, so we really believed Our Lady of La Vang saved us,” he said.

He said most parishes and religious in the archdiocese erect Marian statues in their church compounds. All churches throughout Vietnam hold prayers and offer flowers to Mother Mary during May, which is seen as the month of flowers for her.

Father Bartholomew Hoang Quang Hung, pastor of Van Quat Dong Parish, said local families traditionally take turns to welcome Marian statues to their homes and say rosaries on a daily basis during the month. They decorate their houses and altars and treat visitors with cake, fruits and tea after prayers as a way to strengthen their relationships.

Children dance and offer flowers in front of the parish’s Marian statue on Saturday evenings.

“This month of flowers is a special time for local Catholics to show passionate devotion and heartfelt gratitude to Mother Mary for keeping them in peace and solidarity in hard times,” he said.