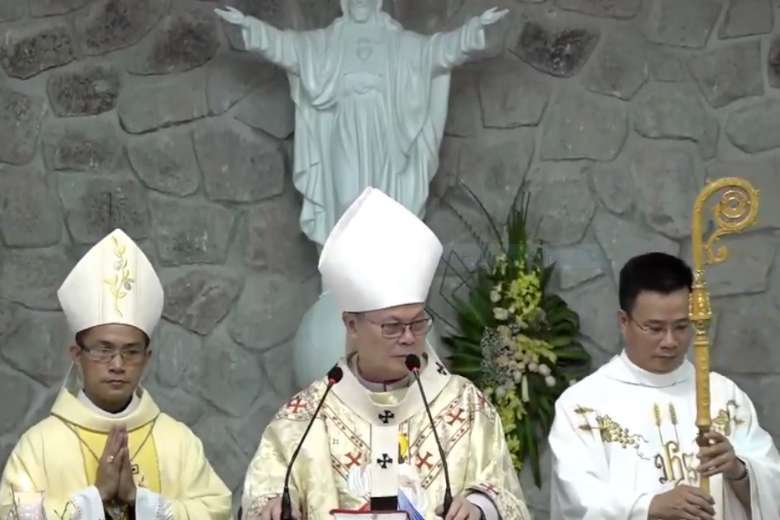 The new abbot of Benedictine monks in central Vietnam is expected to dedicate himself to promoting unity and serving his monks.

Archbishop Joseph Nguyen Chi Linh of Hue presided at the ceremony in the monastery’s east-architecture church. Due to national social distancing rules against Covid-19, only a few priests and people were invited to attend the ceremony aired on the archdiocese’s website.

Archbishop Linh said people consider being elected as good opportunities for personal advancement in their careers, but in the Church those who are elected feel so small to perform duties from God.

“Those who do God’s work gain no personal interests and even have to pay a price for their services like martyrs,” he said.

The septuagenarian prelate called on Catholics to pray for Abbot Tan to “fulfil his mission entrusted and mandated by all monastery members.” He should be a servant who only serves God and trusts in his providence.

The prelate asked local people to pray for him to devote himself to the monastery like his patron, St. Louis Gonzaga

Archbishop Linh said abbots are usually aged over 50 and are venerated according to Vietnamese tradition.

Noting the new abbot only turned 47 in May and is young to lead a monastery, the prelate asked local people to pray for him to devote himself to the monastery like his patron, St. Louis Gonzaga, an Italian Jesuit who died as a result of caring for victims of a serious epidemic in 1591 when he was 23.

The head of the Catholic Bishops’ Conference of Vietnam said Abbot Tan, the monastery’s second abbot, is expected to create spiritual unity and solidarity among local monks.

He said the ceremony was a special event for the 81-year-old monastery, whose Abbot Stephanus Huynh Quang Sanh retired in 2013. Over the past eight years, Benedictines have suffered acts of violence and terrorism caused by local government-led land grabbers who cut pine trees and built houses on pine forests planted by monks.

Those attackers also broke into the monastery, damaged the monastery’s belongings and threatened and vilified their monastic life.

Before the June 21 ceremony, gangsters and solders blocked the path leading to the monastery.

After the ceremony, Abbot Tan expressed his deep gratitude to all people who journey with and support him to pursue his Benedictine vocation.

He said young monks highly appreciate founders and old monks who set shining examples in living a good life and tried their best to build and develop the monastery as it is today.

The new abbot, whose motto is “Fiat,” said he and local monks will continue to treasure, protect and develop Benedictine heritages left by their ancestors.

Born in 1974 in Phu Thuong Parish in the neighboring city of Da Nang, Abbot Tan entered Thien An Monastery in 1995 and took his first vow in 1998. He studied at St. Sulpice Major Seminary in Hue and furthered his studies in Rome before he was ordained a priest in 2016. He served as administrative superior of Thien An in 2018 and was selected abbot in January 2020.

Benedictines from La Pierre-qui-Vire Abbey in France founded Thien An Monastery in 1940. The monastic life attracted many native young vocations.

The monastery has established three other monasteries in Ho Chi Minh City and the provinces of Dak Lak and Dong Nai, plus one in Chiang Mai in Thailand.