The government says at least 150,000 children were born with birth defects, largely from exposure to dioxin 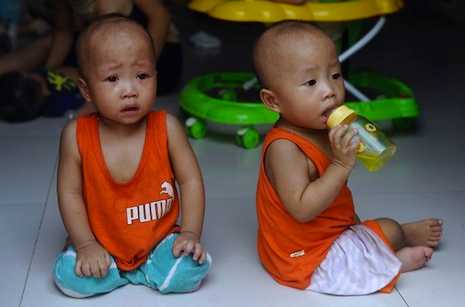 One-year-old Cu Huy Anh, left, with his twin brother at the Bo De pagoda, where dozens of children and teens with disabilities are cared for by a team of volunteers (AFP photo/Hoang Dinh Nam)

The six-day-old baby with excessive fluid on the brain was left outside an orphanage in Hanoi – just one of thousands of disabled children to have been abandoned in Vietnam.

The communist country of 89 million has some of the highest rates of child disability in the world – the legacy of decades of war, including use of defoliant Agent Orange – but experts say it is not equipped to provide adequate care.

At the Bo De Pagoda orphanage, where the baby was abandoned last week, dozens of disabled children – from teenagers with Down Syndrome to two-month-old blind babies – are cared for by a team of 34 volunteers.

"The parents leave the kids at the pagoda gate or abandon them at hospitals. With the more severely disabled ones, the families bring them here when they simply can't care for them anymore," volunteer Nguyen Thi Thanh Hue said.

Hanoi says up to three million Vietnamese people were exposed to dioxin in Agent Orange, and that one million suffer grave health repercussions today, including at least 150,000 children born with birth defects.

Disabled children are among the most marginalized in the world, facing bullying and other discrimination, according to a UN report released today in the Vietnamese city of Danang, a dioxin "hotspot" where victim groups say rates of cancer and birth deformities are higher than the national average.

Vietnam has roughly 20,000 children in institutional care and over half are disabled, according to UN Children's Fund (UNICEF) executive director Anthony Lake.

"Kids in institutions simply aren't getting the kind of stimulus and, I don't want to sound too sentimental, but love, that allows the brain to develop for the rest of their lives," he said.

Even outside of institutional care, life is a daily struggle for Vietnam's disabled children.

Linh Chi's family says her grandfather was exposed to Agent Orange during the war.

She was born with no limbs and is often stared at and sometimes bullied at school.

"I just wish our community could pay her a bit of attention. It would boost her self-esteem. Now she feels so different from everyone else," her mother Trinh Ngoc Thuy said by telephone from Yen Bai province where they live.

"I really find it hard to answer her questions like: why am I like this? Why don't I have arms and legs? When will my arms get longer?" she said.

The family has received minimal support from Vietnamese authorities and says surviving on their joint income – she and her husband both work – of four million dong (US$190) a month is hard.

Caring for a child with a disability places "an incredible burden" on families, UNICEF's Lake said.

The UN report argues the solution is to change attitudes to disability and support families to help include them in society rather than to institutionalize children.

"There is no group of children who are not just left behind but nearly invisible as much as children with disabilities," Lake said.

UNICEF has a pilot scheme in Danang to provide day care to children with disabilities, which if successful could be expanded.

The communist government has publicly committed to action to help the country's disabled population, which it says numbers 6.7 million but does not break down into age groups.

Vietnam, which has signed but not ratified the UN convention on the rights of persons with disabilities, is also looking at piloting cash benefits to support families with disabled children next year, Lake said.

In the meantime, families must cover costs and take on the burden of care – such as that of Nguyen Phuong Anh, who has "Osteogenesis Imperfecta" or "brittle bone disease," which has left her wheelchair bound.

Phuong Anh's mother gave up her job to care for her disabled daughter, and has literally become "her legs" in order to allow the 16-year-old to attend a normal state-run school and live a full and active life.

"It is still hard because... the facilities and the platform at public school are not made for people in wheelchairs. That's a fact in Vietnam and I just really hope for that to change," she said.

Phuong Anh recently appeared as a contestant on Vietnam's version of the Got Talent television show and said she hopes to use her local celebrity status to change attitudes in her country.

"The most important thing is for other people to treat us equally," she said. AFP