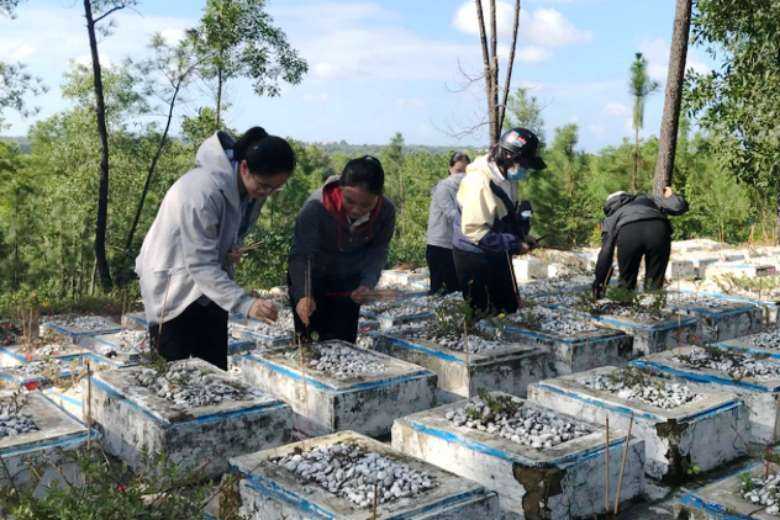 Every year, Dang Thi Thanh offers incense and flowers on the grave of her aborted fetus at a church-run cemetery on the Feast of the Holy Innocents and the Lunar New Year Festival.

Thanh, 40, who lives by selling food at a traditional market in Phu Vang district of Vietnam's Thua Thien Hue province, seeks forgiveness from her unborn child killed 22 years ago. It is an important part of her emotional healing process.

The woman had to drop out of school due to poverty after her mother divorced her alcoholic and abusive father.  She started to work at a coffee house to support her mother when she was 18. The married owner of the coffee house got her pregnant and forced her to abort her three-week fetus.

Two years later Thanh married a young man and lived in his family house. He and his family members treated her abominably after discovering her tragic past.

They kicked her out of their house while she was pregnant and her husband married another woman. After she gave birth to a baby boy at a hospital, she decided to hand him over to a church-run orphanage as she had no job and her husband’s relatives wanted to take the baby away from her.

“I always have a terribly guilty conscience about leaving my children, especially the aborted fetus. At that time, I was too young to make better choices,” the woman, a follower of ancestor worship, said in a low voice.

Thanh’s son was adopted by a local Catholic family who were childless. “I always pray for him to be happy and become a good person in the future,” she said.

To heal herself, she tries to help orphaned children and elderly people with no one to care for them with her dedication and hard-earned money.

For years she had lived in distress, had a strong sense of inferiority, harbored resentment against herself and avoided social gatherings. Then in 2017 she joined the Pro-Life Group established by a Catholic priest to help women like her.

Group members included those who were deserted by men and forced to go for abortions. They were provided an opportunity to get over the emotional distress and improve their material life

Thanh said she is grateful to the local Catholics who gave her money to sell food for a living and encouraged her to take part in social activities so that she could leave behind her sadness and suffering and integrate into the community again.

The women meet on a weekly basis to share their joys and sorrows with one another. They also support one another to make a living and help other people. It was members of the group who helped Thanh find the grave of her aborted fetus at the church-run cemetery.

Father Dominic Truong Van Quy, who set up the Pro-Life Group in 1990, said its 43 members visit, comfort and help women who had to undergo abortions. The women are encouraged to bare their souls and engage in social and recreational activities to deal with their emotional problems.

We also have rescued 2,000 babies from abortion during the past 30 years since the group’s establishment

Father Quy, the pastor of Chanh Xuan Parish, said many volunteers who gave birth after failed abortions are also part of the group. The members volunteer to collect aborted fetuses from public hospitals and private clinics, bury them at cemeteries and educate the local people to respect life which is a gift from God.

“Fetuses are also humans, so they should be buried properly,” said the 54-year-old priest, who uses his family’s 5,000-square-meter plot of land on a hilly tract to bury them. It currently has 46,000 fetuses, he said.

Group members meet every three months to pray and share their practical experiences in finding and saving pregnant women from abortions.

On the Feast of the Holy Innocents, their patron, they paint and clean graves of unborn babies at the two Catholic cemeteries, visit orphanages and attend Mass.

Teresa Pham Thi Ngoc Oanh from the Pro-Life Group said in the past they gathered 25-40 aborted fetuses daily from the hospitals and even in dustbins. Now they collect around 5-10 fetuses as most women terminate the pregnancies early, said the 54-year-old volunteer.

“We also have rescued 2,000 babies from abortion during the past 30 years since the group’s establishment,” Oanh added while noting that these mothers whose babies were saved experienced lesser trauma than those who go for abortions.