Priests called on to re-evangelize themselves and follow St. Joseph in living in poverty Priests in Vietnam have been asked to live in poverty, gentility and humiliation to serve God’s people.

“Priests are guards of the people of God. They are among communities to pray for them to enjoy peace, communion and holiness,” Archbishop Joseph Vu Van Thien said at the Chrism Mass held at Hai Phong Cathedral on March 30.

Archbishop Thien, who serves as apostolic administrator of Hai Phong, said priests act like flickering candles in front of God’s altar in order to maintain and keep alive the prayer life of God’s people.

The prelate, who also celebrated another Chrism Mass in Hanoi on Holy Thursday, said priests are sent to parishes and communities to care for souls, proclaim the Good News to the poor and administer sacraments to people in need through their presence of love, meeting, consolation and encouragement.

He said priesthood is always noble, although some priests fail to remain constant in their vocations and to reflect Christ’s face, which could not tarnish the beauty of the priesthood.

During the Mass, Archbishop Thien blessed three oils — the oil of catechumens, the oil of the infirm and holy chrism — which will be used in the administration of the sacraments throughout the 342-year-old diocese for the year.

“Priests are like mystic oil spreading to all paths of life since oil is of grace, love, treatment and a source of happiness,” he said.

Priests are human beings and not worth receiving noble priesthood. He called on local Catholics to pray for their priests to stay with their missions, carefully guard the people of God and bring them peace, grace and delight.

Bishop Peter Nguyen Van Kham of My Tho in southern Vietnam said priests are anointed and sent to proclaim the Good News and offer abundant life to Christian communities.

“To fulfil this mission, it is best to look at Jesus who came to carry out the will of God the Father and be close to his flock of sheep,” Bishop Kham told the congregation at the Chrism Mass on March 31. 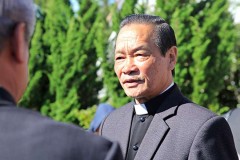 Bishop Kham, who serves as general secretary of the Catholic Bishops’ Conference of Vietnam, said priests are sent to serve God’s people, so they must know their situations, joys and sorrows and be close to their sheep so that they can sense their smell.

“On behalf of the diocese, I would like to deeply thank our priests who make endless efforts to serve, visit, share and walk with local people who live in poverty,” he said. The diocese covers the provinces of Long An and Tien Giang and part of Dong Thap.

The 69-year-old bishop warned that local priests should re-evangelize themselves because some aspects of their lives are not imbued with the Good News, and try to look at everything with God’s eyes, not theirs as they themselves are kept in habits that are not suitable for priesthood. Priests are chosen to be anointed and sent to people, so they must serve in humility and trust in God’s providence.

Bishop Joseph Tran Van Toan of Long Xuyen called on priests to follow St. Joseph in living in poverty but with peace and hope to protect Jesus and Mary. The saint, who chose God as his inheritance, lived in gentility and humility to bring up Jesus.

Bishop Toan asked local Catholics to pray for their priests to be in poverty, humility and gentility as they choose working with the poor as their priority.

The prelate also apologized to local clergy and laypeople for his wrong words, behavior and shortcomings that caused damage to their hearts.

He said the Chrism Mass manifests the unity of the priests with their bishop like a family so that they must apologize to one another.