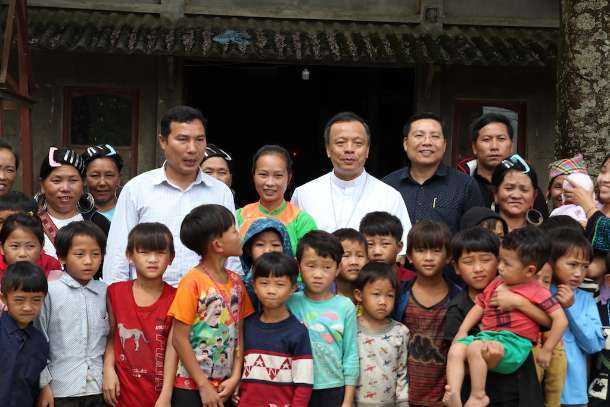 Father Peter Nguyen Truong Giang rises early to prepare for the journey to Den Thang mission station. It’s around 10 degrees Celsius as he loads rice, instant noodles, cooking oil, fish sauce and salt onto a white pickup truck he borrows from a local.

Father Giang and two lay leaders leave Lao Chai chapel at 6am for Den Thang, which is only 20 kilometers away, but it takes them about three hours to complete the journey on a narrow, steep, winding, rough and muddy path with potholes through forests.

They visit and offer food to some 10 Hmong ethnic families who have converted to Catholicism in recent years. They all gather at a family’s house and serve them a simple meal.

“Because of the difficult roads, I have visited this mission station three times since I moved to Lao Chai Parish in late 2019,” the 41-year-old priest said, adding that he is looking for 600 square meters of land to buy and build a chapel.

The priest and two sisters serve Lao Chai Parish with some 1,400 Catholics. Most of them are Hmong villagers residing in six subparishes and mission stations. The farthest is 40km from the parish house. The parish is based in Sa Pa district of Lao Cai province.

Local parishioners are very poor, so the parish and all its subparishes lack the most basic facilities until they find the money to buy land and build more chapels. The parish has four small wooden chapels built on local people’s land by previous parish priests.

Ordained in 2017, Father Giang said the chapels are owned by local people only on paper because Lao Chai Parish has not been recognized yet by Vietnam's government. The parish was separated from Sa Pa Parish last year by Hung Hoa Diocese.

“I try to celebrate weekly Masses at the chapels so as to maintain religious activities among local people and promote their faith life,” he said. Many catechumens attend services even though they are not baptized yet.

Father Giang said he celebrates Masses in both Hmong and Vietnamese, the national language, so that local people can preserve their own written language and improve their Vietnamese. Fluency in the national language is essential for them to work with other people, seek jobs and avoid rapacious traders as well as social evils and human trafficking, he added.

He serves as deputy of the Ministry Committee for Ethnic Minorities, which provides pastoral services and evangelization for over 20,000 Hmong Catholics and other ethnic groups in the country’s largest diocese covering part of Hanoi and nine mountainous provinces. Father Giang said he has been interested in evangelization among Hmong people since he was a seminarian. He spent his summer vacations providing pastoral services to Hmong communities in the provinces of Lao Cai, Son La and Yen Bai. He also taught them the Hmong written language and learned the spoken language from them.

During the past two years, his committee composed a Vietnamese-Hmong Dictionary and held summer courses in the Hmong language for members of parish councils, lay missionaries and catechists.

Lovers of the Holy Cross Sister Mary Nguyen Thi Thu Huyen, one of two sisters who work at the parish, said they train groups of lay missionaries and send them to villages where they talk to villagers about Christian values at wedding parties, funerals and festivals.

Sister Huyen said many couples have not celebrated their weddings in church. Some women and their children, but not their husbands, embrace the religion, while many men have more than one wife. They still get married when they are 14-15 years according to tradition.

Hmong villagers harvest one rice crop on terraces annually and suffer a lack of food for four months of the year. They have to borrow money from others to survive.

Their breathtaking rice terraces in Muong Hoa valley are a popular tourist destination but they gain no benefits from their property.

The national power grid and inter-village roads are not built in the area where some 10 hydroelectric plants run. Local people have to install water generators made by China to supply power for their needs.

“I love them because they are treated unfairly here,” Father Giang said, adding that local government authorities charge tourists 75,000 dong (US$3.20) each for entrance fees to the destination, but they do not share the fees with villagers who own the spectacular terraces and have been there for generations.

“We daily work from 5am to 10pm, especially on the weekend when we visit and provide pastoral services for people at local chapels,” he said. They also cook, wash their clothes, clean the chapels and repair water pipes and electric systems by themselves. Local people use plastic pipes to get water from small brooks.

“We are busy doing work all day and overcome the cold weather,” he said.

Father Giang said Hmong people are not active in community work, so he tries to change their mindset by asking them to clean their surroundings.

Michael Lo A Lu, one of Father Giang’s Hmong parishioners, said he is grateful for the priest's efforts to bring people together, look after people in need and find benefactors from other places to provide basic food for them. The priest also helps people to earn an income by inviting Catholic tourists to stay at their homes.

The 42-year-old father of seven said local families have many children and regularly suffer from a lack of food.

Joseph Sung A Lung, 39, said Father Giang celebrates Masses at his home and encourages people to be true to their faith under any circumstances.

“The priest’s emotional and material support affords us great consolation to overcome daily challenges,” the father of five said. “We are proud of our priest, who treats us like his family.”

Father Peter Pham Thanh Binh, Sa Pa Parish priest, said the number of Catholics has increased from 1,000 in 2007, when he was assigned to the parish, to over 3,000 now in three parishes and 15 subparishes and mission stations.