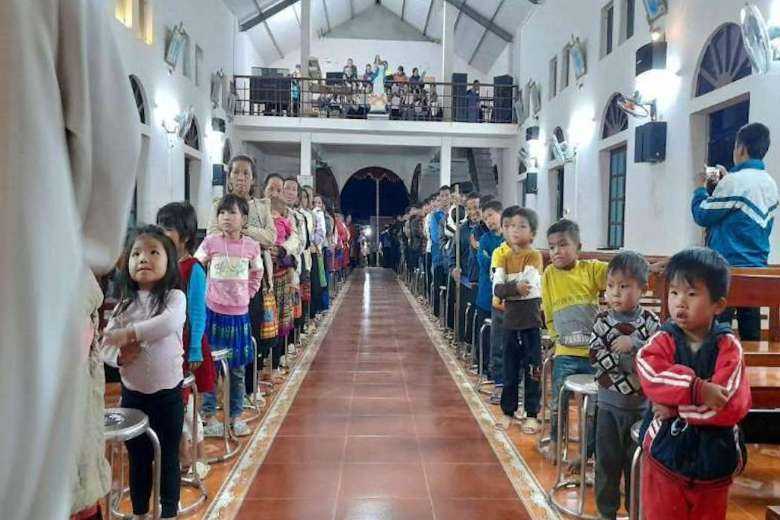 Father Joseph Nguyen Tien Lien starts his daily work at 4am and finishes at midnight.

The Vietnamese priest pays pastoral visits to Hmong villagers in remote areas, builds chapels in their villages, collects and offers food and clothes to people in need, and repairs people’s homes damaged by natural disasters.

He holds summer courses in faith education for hundreds of people at his church. Some 100 Hmong villagers attended the latest one-month course held last Lent. They were given free food, accommodation and travel expenses.

The priest, who has erected 13 chapels in villages, was assigned to Mai Yen Parish in 2017 and became the first priest of the parish, which was founded in 2007 by Hung Hoa Diocese. The parish is based in Mai Son district of Son La province, where not all religious communities are officially recognized by the government.

The province is home to the Kinh majority and ethnic groups such as the Hmong, Dao, Muong, Thai, Tay and others. Most ethnic groups have many children, cultivate hillside fields and lack food around the year.

“We are elated at the result that over 700 people, most of them Hmong villagers, in isolated rural areas have embraced Catholicism over the past four years. Thank God,” said Father Lien, who was ordained in 2016.

“Evangelizing ethnic villagers is my top priority as they live in misery and suffer from annual natural disasters. I want to bring God’s love to them so that they can enjoy divine mercy as others do.”

The parish now has 1,600 members. Respecting Hmong villagers’ patriarchal tradition, the priest pays much attention to working with village heads, households and people from privileged backgrounds. Once they accept the faith, they will call on their family members and even other villagers to embrace Catholicism.

Local benefactors have donated 45 million dong (US$2,000) to those stricken by the Covid-19 outbreak in Vietnam's southern provinces.

“We try to give as much succor as we can to people in need even though we also live in poverty. We long to make contributions to social development and cooperate with all people for the common good,” Father Lien said.

The 42-year-old priest said the evangelization achievement is partly thanks to endless efforts made by local Catholics, especially elderly ethnic villagers who have passed on the faith to younger generations for decades without resident priests.

“We put in a great deal of effort to bring Catholicism to other people in this area as a way to show our deep gratitude to foreign missionaries who introduced the faith to local ethnic groups in the early 20th century,” he said.

The priest said he is inspired by shining examples of evangelization by missionaries who won the hearts of ethnic groups by living among them to look after their material and spiritual life, acquiring their languages and cultures. They paid pastoral visits to remote villages and fostered harmonious relationships with villagers.

Foreign missioners left local people with faith heritage and churches when they were forced to move to other places amid fierce fighting between French troops and communists in the 1940s.

Dozens of missionaries worked among Hmong, Muong and Thai villagers in the northwestern provinces of Son La and Yen Bai. They built five churches, three of which — in Nghia Lo, Giang La Pan and Phinh Ho — still exist.

Many missioners translated the Bible into the Hmong language and composed books of prayers in Hmong that continue to be used by local people.

Father Peter Nguyen Truong Giang, who serves as deputy of the ministry committee for ethnic minorities in Hung Hoa Diocese, said Bishop Peter Nguyen Van Vien, the diocese’s apostolic administrator, early this year approved a book of prayers composed in the Hmong script according to international standards by his committee. The new book replaces one with the old writing system that is not suitable for the modern language.

Father Giang, who is fluent in the ethnic language, said that in March 90 priests, nuns, catechists and lay missioners from Lao Cai province were trained to read Hmong prayers and how to use the prayer book in liturgy.

Mary Nguyen from Dien Bien province said evangelization work has really borne fruit in the northwestern provinces of Dien Bien, Lai Chau and Son La since 2016, when priests voluntarily started to offer pastoral care to Catholic communities with 100-300 members each.

Kinh people moved to the area decades ago from other provinces. At first they had to quietly practice their faith at home for decades and many had marriage problems due to lack of pastoral care.

“Now religious activities have improved and we have Masses on a weekly basis. Thanks to God,” Nguyen said.

She said the number of Catholics in her province has increased from 1,500 to 3,000 in recent years. Hundreds of Hmong embrace Catholicism every year.

Local Catholics make donations and work with the priest to help ethnic groups who grow crops for a living and live in poor conditions. They have built seven chapels and one hostel for ethnic students in the past five years.

“We hope our parish will be recognized soon so that we have more favorable conditions to live out faith and work for the common good,” he said. “In doing so, we will protect the heritage of faith from our ancestors whom we are all really proud of.”