A priest in a southern city has asked the local government to recognize the church’s legal ownership of former educational facilities that were “borrowed” by the government over four decades.

In his petition, Father Tung said the parish was granted legal ownership of a plot of land over two hectares next to the current church in 1951 and given building permits for two buildings used as a primary school in 1967 and 1974. The parish also paid annual taxes on its land.

The petition said after April 1975, when the Communist government publicized local private schools, Ho Chi Minh City Archdiocese gave the rights of management and use of its own facilities to the local government. The hen parish priest Father Dominic Vo Van Tan handed over the school to the authorities. The school with two three-story buildings was named Phu Dong Primary School.

The petition said a joint communique issued by the government and church educational officials stated that “the archdiocese agreed to transfer the government the right to use its educational facilities from the academic year 1975-1976 to serve educational purposes,” and “the local church retains the ownership of those facilities.”

In the 1990s, the authorities recognized the parish legally using a total land of 3,593 square meters, and the school facilities are lent by the archdiocese, which owns them.

The 55-year-old priest said the city government made illegal decisions that flagrantly violated the parish’s legal rights and interests. The government also flouted land laws and regulations on ownership and usage of the property. Religious organizations' land is not to be traded, transferred under any circumstances.

Father Tung demanded the People’s Court deal with the land dispute by asking the People’s Committee of the city to immediately withdraw and abrogate the certificates granted to the school.

He also asked the government to restore and acknowledge the parish’s legal right of using the property according to land law. Private ownership of land is banned in the communist country. 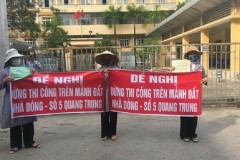 The petition and related copies of documents were sent to the People’s Court of the city on Nov. 30.

Tran Thi Thuong, deputy of the court’s office, promised that the court officials will deal with the petition and announce the results on Dec. 8.

Thi Nghe parish is one of the oldest parishes in the country’s most active archdiocese.

Some 370 charity, healthcare and educational facilities owned by the archdiocese were forcibly closed or transferred to the government after 1975. Only a few of them have been returned to the local church.