Thousands of couples gather in tropical La Vang to fete 30 years since project first launched for war refugees in U.S. 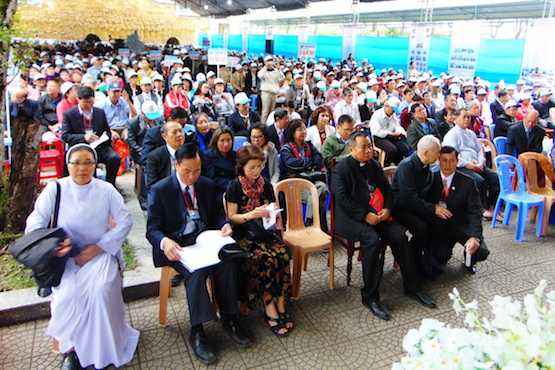 Vietnamese couples from around the world attend a three-day event celebrating the 30th anniversary of the Marriage-Family Enrichment Program at La Vang in Quang Trị Province, Vietnam on Feb. 24. (ucanews.com photo)

Tens of thousands of Vietnamese Catholic couples have healed rifts in their families and seen the bonds of wedlock strengthened courtesy of a program set up by a Jesuit priest in the United States 30 years ago.

From Feb. 23-25 some 2,500 couples from around the world marked the 30th anniversary of the Marriage-Family Enrichment Program in the central province of Quang Tri.

"We are deeply grateful to this program which has brought peace to our family and has helped us to improve our relationship," said 37-year-old Francis Xavier Pham Van Ha, who attended the event at the National Shrine of Our Lady of La Vang.

Ha said that in the past he had mistreated his wife and not shown her the respect she deserved given all her hard work in maintaining their home. In turn, she had spoken ill of him to his relatives.

Ha, a trader, said they were reconciled after attending one of the program's workshop at their local parish three years ago

"Now we feel God's love in our happy family. We say daily prayers, are ready to apologize to one another, and love one another as we did when we were just married," said Ha, who hails from Phat Diem Diocese.

He said they now have monthly meetings with other couples, visit and console their neighbors and friends, and go on picnics together.

During the three-day event in La Vang, participants discussed ways to strengthen their family ties, shared their faith experiences, recited the rosary, carried a Marian statue around the shrine, attended a Eucharistic adoration and delivered cultural performances.

Bishop Joseph Chau Ngoc Tri, head of the Vietnamese Bishops' Episcopal Commission for Marriage and Family, urged them to bring more young couples into the program so they too could benefit from its shared wisdom, especially new converts to the Catholic faith.

Attendees were also asked to visit families with problems and help mediate and bring them closer together.

Jesuit Father Peter Chu Quang Minh, who founded the program in the U.S. in 1987, said it aims to teach Vietnamese families who fled overseas in the wake of the 1955-75 Vietnam War how to live as good Catholics, maintain traditional family values and build a happy life in their new home.

Father Minh, 80, fled to the U.S. in 1975 and has worked with Vietnamese refugees for years. He said the program is active in North America, Europe, Australia and Asia and has helped over 42,000 couples.

It was introduced to Vietnam for the first time in 2003.