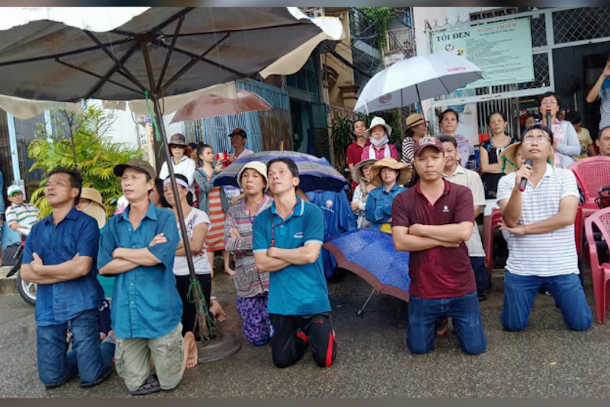 Catholics who say that were victims of an illegal January eviction of 100 households in Vietnam's southern Ho Chi Minh City pray on the day of a funeral service for one of the former residents who recently died. (Photo courtesy of Oc Mit)

Cao Ha Truc’s family was among some 100 Catholic households who were in January evicted from five hectares of land that they say was originally acquired by the Society of Foreign Missions of Paris in 1954.

Hoa's relatives erected a temporary tent on their old land to provide shelter and somewhere for people to park their motorcycles while offering prayers for the dead woman.

But Truc said police and local government officials surrounded the site before removing chairs and other items. He added that loudspeakers were used to accuse people of acting illegally.

Hoa’s relatives said they needed the tents, umbrellas and chairs for those people who would gather to pray for her soul for the 7-10 days following the funeral.

Police and plainclothes security officers also closely monitored a service held at the local Loc Hung church and then a group of masked men followed the funeral procession to a cemetery on the outskirts of the city.

"We tried to hold our dead relative's funeral well and did not cause any problems, but officials harassed us and showed a lack of respect for the dead," Truc said.

Tan Binh District authorities, when evicting families and demolishing their houses at the beginning of this year, accused them of building dwellings without proper permits.

Local people claimed that the Catholic families living there and cultivating vegetables had previously obtained title documents which should be accepted.

As a result of former residents making representations to the national government in Hanoi, a direction has been issued for authorities in southern Ho Chi Minh City to investigate their complaints.

Local residents have many times petitioned local government officials, calling for dialogue over the land dispute, but officials have thus far ignored their requests.

Therese Hoa, whose funeral became a battleground, spent decades fighting against what she maintained were corrupt practices by district officials.