Tran Duc Thach, pictured in court on Dec. 15, told a judge that devotion to democracy is not a crime. (Photo: AFP)

A court in central Vietnam has imposed a harsh prison sentence on an elderly poet and blogger for his posts critical of the communist government.

On Dec. 15, the People’s Court of Nghe An Province sentenced 68-year-old Tran Duc Thach to 12 years in prison for charges of “activities aimed at overthrowing the people’s government” under Article 109 of Vietnam’s Criminal Code. He will also have to serve another three years’ probation after his sentence.

Vietnam News Agency reported that Thach, who was arrested in April, was accused of writing and posting articles distorting the country’s political, economic and social events, and smearing government leaders on Facebook from May 2019 to March 2020.

The state-run agency said the former soldier, who served with North Vietnamese forces during the Vietnam War, was among five co-founders of the Brotherhood for Democracy, which is banned by the government. Many of its members have been jailed since its establishment in 2013.

It said his crimes were seen as being dangerous and aimed at fighting the one-party government.

Thach had been imprisoned for three years in 2009 for “conducting propaganda against the state” along with his two fellow dissidents Vu Van Hung and Pham Van Troi. However, he was among over 10,000 prisoners granted amnesty in 2011 to mark the country's National Day.

His poetry describes life without freedom and justice, while his novels cover human rights abuses and the legal system in the Southeast Asian country.

His lawyer Ha Huy Son said police erected security barriers 500 meters away from the court building. Only the defendant’s wife and brother were allowed to attend the three-hour trial.

Lawyer Son, who accused Judge Tran Ngoc Son from the People’s Court of refusing to allow him to copy case documents used at trial, said Thach admitted his activities but denied that they were done with the aim of undermining the government. He wanted to build a better society according to his own understanding.

Thach told the judge that “the hearing is the last words of my epic that will not end here but resound forever by time and by national history. I am very proud to be among those who struggle for democratic values in the country and fight Chinese influence and invasion.” 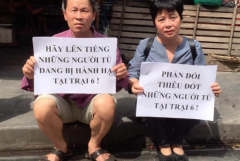 Thach plans to appeal to a higher court. “Devotion to democracy is not a crime,” the defendant said loudly.

Lawyer Son said the case documents showed no evidence that the defendant’s activities aimed at overthrowing the government. The constitution does not ban citizens from supporting or building political pluralism, multiparty ideologies and an economy based on private sectors.

The lawyer who defends rights activists, asked the jury not to charge Thach with subversion and release him.

Christian lawyer Nguyen Van Dai, head of the Brotherhood for Democracy, said fighting to remove the communist government is a right, duty and responsibility of all Vietnamese.

Dai condemned Thach’s sentence and called on the government to free him immediately and unconditionally.

Activists said Thach's jailing was a threat to dissidents ahead of the Communist Party of Vietnam congress scheduled for January, a five-yearly leadership transition where top leaders jostle for power.