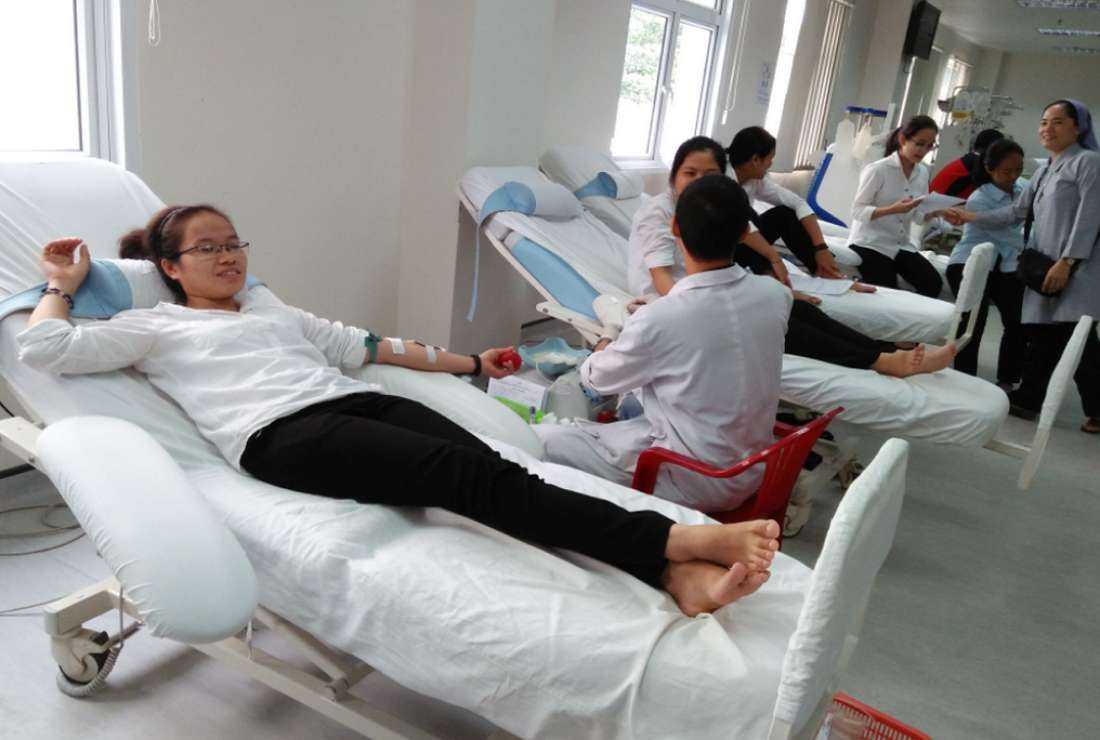 In January, while serving Covid-19 patients at the General Hospital in Hue, Sister Marie Nguyen Thi Kim Oanh was heartbroken to see a patient die due to a lack of blood.

The patient from the neighboring city of Da Nang suffered heart failure and needed a blood transfusion, but the hospital had no blood available.

Sister Oanh, who volunteered to work at the hospital for three months, said few people during the pandemic donated blood to the Hematology and Transfusion Center of the Central Hospital in Hue, and consequently the hospital’s blood supplies were inadequate to transfuse into patients, especially those who required major surgery and transplant operations.

In 2021, the center required 1,200 to 1,500 units of blood on a daily basis while the amount of blood it received amounted to less than a quarter of its demand.

The nun from the Filles de Marie Immaculée (Daughters of Mary of the Immaculate Conception) said the hospital staff and volunteers were motivated by hospital officials to donate their blood to save patients.

“I decided to give 250 milliliters of blood for the first time in early April although I was afraid of hypodermic needles,” the 41-year-old nun said, adding that other volunteers including sisters and brothers also donated their blood.

The nun, who serves as a nurse at the congregation’s mother house in Hue, said after she finished three months working at the hospital in April, she returned home and told her superiors about the serious lack of blood threatening patients’ lives. The superiors welcomed her suggestion and registered with the hospital for blood donations.

On June 14, World Blood Donor Day, 70 sisters aged from 20-60 donated 200-350 milliliters of blood each. Hospital workers ran medical checks on the nuns before taking blood from them.

The hospital offered the voluntary unpaid blood donors a packet of biscuits each as a way of showing their gratitude to them.

“We believe that blood donations are very good deeds as drops of our blood will go towards saving the lives of patients who would otherwise die,” Sister Oanh said.

This is the first time so many sisters have publicly given their blood for use in hospitals during a blood donation drive. In the past, some nuns individually donated their blood to seriously-ill patients who needed it. Their relatives or parish priests asked the nuns for blood donations.

Sister Lucia Phan Thi Thao, who donated 350 milliliters of blood that day, said she has given blood three times to save patients.

“As a nun, I had no money to offer them in that situation so I decided to donate my blood to save her. I was overjoyed to see the mother and her child survive”

Sister Thao said when she worked in A Luoi parish in 2008, she donated blood to a Van Kieu ethnic woman who lost a lot of blood during an emergency caesarian. The woman’s husband asked her to donate blood.

“As a nun, I had no money to offer them in that situation so I decided to donate my blood to save her. I was overjoyed to see the mother and her child survive,” the 39-year-old sister said.

The nun, who works at a house for retired nuns, said she also gave blood to two women who suffered strokes.

“I believe that my blood donations mean I bring love and life to other people, especially poor patients as blood is priceless,” she said.

Daughters of Our Lady of the Visitation Sister Therese Phan Thi Dieu Trinh said her congregation has not launched a blood drive yet but many young sisters annually register to donate their blood at the Central Hospital.

Sister Trinh said 50 nuns took part in a blood drive at the hospital in May and they were given cake and milk afterward by hospital workers.

“She was saved and was only too happy to be with her daughter thanks to my blood, and I was like a dog with two tails that they were baptized at Tri Buu parish three months later”

She said many nuns also generously give their blood to people who have traffic accidents, single mothers who suffer a hemorrhage after giving birth, and children with coagulopathy, a condition that involves excessive bleeding or clotting.

She donated 350 milliliters of blood to a 46-year-old woman from Phu Yen province in 2018. The woman had a serious accident while taking her son with heart problems to Central Hospital in Hue.

“We are always ready and willing to offer our blood to patients to keep them alive in case of emergencies when blood becomes essential to their survival,” Trinh, deputy of Luong Van community, said.

A sister who asked not to be named said she gave her blood to a woman with HIV/AIDS after the woman gave birth in 2019.

The donor from the Filles de Marie Immaculée, who works with people with HIV/AIDS in Hue, said the victim was abandoned by her relatives and had to move from her home province of Quang Tri and gave birth at a hospital in Hue.

“Finally she was saved and was only too happy to be with her daughter thanks to my blood, and I was like a dog with two tails that they were baptized at Tri Buu parish three months later,” she said.

“Christ shed his blood to save human beings. We follow his example by donating our blood to share life with our brothers and sisters. That is our ecstasy,” she said with pride.